Four of the largest California wildfires, consuming more than 1.1 million acres, occurred in the last two years. Five of the most destructive, leaving 28,000 structures in ashes, and five of the deadliest totaling 131 lives lost, also occurred in 2017-18, according to Cal Fire. 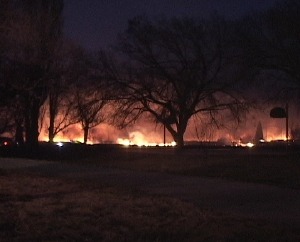 The Forest Service’s fire management plan for the Inyo Forest outlines activities to help reduce a 100-year build-up of fuel, exacerbated by drought, disease and heat, but that plan will take time and money.

So, what do we do in the mean time? Rake the forest floor?

Inyo’s Board of Supervisors and Emergency Services Director Kelley Williams have started that discussion.

The recent California State Association of Counties meeting focused in on just what entities could do, according to Supervisors Matt Kingsley and Rick Pucci.

According to Kingsley, the 2019 state budget includes $1 billion for fuel treatment. “What we, counties, can do is education,” he said. “We can help make ourselves and our communities more fire safe.”

While most of Inyo County communities aren’t surrounded by forests, they are surrounded by sage brush and fuel-heavy drainages. Plus, Owens Valley is a wind tunnel. That combination took out 19 structures in Big Pine in 2011.

Both Pucci and Kingsley focused on Fire Safe Councils, community driven non-profits with the ability to organize projects and, even more important, to apply for grant funding to carry out those projects.

According to Pucci, the County has started discussions with the Los Angeles Department of Water and Power, local fire departments and the Conservation Camp. “We can’t keep something like the Paradise Fire from happening,” he said, “but we have to be prepared, we have to be able to lessen the damage.”

Other agencies are looking at the danger with a different perspective. According to Deb Schweizer, Inyo National Forest public information officer, air quality districts are loosening up regulations on proscribed fires. South Lake Tahoe used to have an ordinance against raking pine needles in residential areas; now they allow raking within a 30-foot perimeter of structures, Pucci said.

In the next month or two, Williams and local partners will be holding community workshops to start that education process. “There’s a lot of information out there,” she said. “Our resources are limited, but there’s a lot that individuals and communities can do on their own.”

Individually, Williams mentioned the Sheriff’s Department Code Red system that alerts registered residents of emergencies by phone. Then there are evacuation preparation and plans as well as how to get a family and their animals all back together again.

Sierra Wave will publish the list of workshop dates and locations as soon as they are available.