Inyo County Superior Court Employees began leafleting jurors outside the Courts on Monday to make them aware of a protracted contract disagreement with Courts Administration. 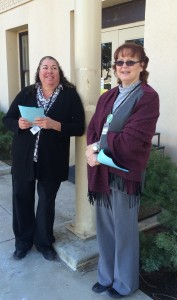 Court employees have gone without a raise since 2009. When the State of California severely cut funds to the Courts 6 years ago, employees also agreed to pay an additional 9% in medical premium costs and 7% in retirement costs in order to retain employees and avoid further cuts in service to the public. Other Courts whose employees agreed to assume increased pension contributions offset the contributions with commensurate wage increases, bridging the significant salary gap faced by Court employees and their families.

Court workers made these concessions with the understanding that, when the economy corrected, their wages would be brought back up.

A bargaining wage re-opener last August resulted in no agreement. Administration made just one offer of 6%, which has been voted down by employees twice. Administration attributes the problem to underfunding by the Administrative Office of the Courts, but the Court’s local budget shows significant salary funding which has not been allocated to front line employees.

In the meanwhile, the Courts are severely challenged with recruitment and retention. “It can take a new Court Clerk up to 5 years to become fully trained,” explained Maureen McVicker, the Lead Court Clerk in Independence. “The Court cannot afford to continue losing our skilled employees to comparable County jobs, which now pay as much as 14% more.”

This isn’t the first time Court employees have had issues with local Courts Administration. After employees agreed to wage freezes in the last negotiations, they were surprised to learn that Administrators gave themselves an increase. Employees were promised by last year’s Presiding Judge that, moving forward, there would be an open door policy to discuss concerns.

“A six percent wage increase doesn’t even break us even with where we were at in 2009,” explained bargaining representative and Senior Court Clerk Tricia Fath. “Employees have flexibility in our position, but Administration needs to start approaching this from a problem-solving perspective, rather than “take it or leave it. ”