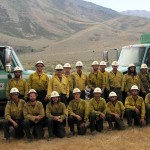 Hotshots provide initial attack response for fast-moving fires in remote regions and are trained to meet the most stringent physical requirements.

On July 16-17, 2014, a group of 20 determined firefighters from the forest, formerly referred to as Crew 3, completed a demanding and extensive certification process to become an Interagency Hotshot Crew.

“I am proud of the work and dedication that this crew showed to become the Inyo Hotshots,” said Ed Armenta, Inyo National Forest Supervisor. “Their skills will assist with fire response throughout the Eastern Sierra as well as being part of the interagency response when they are needed for highly complex fires throughout the nation.”

The Inyo Hotshots join an exclusive group of 47 hotshot crews in California and more than 110 crews in the nation. Within two hours of receiving orders, hotshots must be ready to travel anywhere in the country and are often flown in to steep terrain where they fight fires using only the equipment they can carry. They work extended shifts and battle the most dangerous, complex, and intense wildfires.

Hotshots also respond to all types of national emergencies including hurricanes, tornadoes, floods, earthquakes and other disasters.

This is great news. Good job!

Congrats to the Inyo Hotshots.
Stay safe out there.