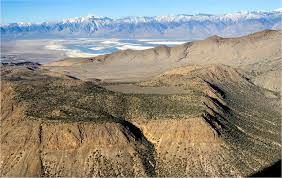 BISHOP, CA — Yesterday K2 Gold, a Canadian mining company, announced that it is indefinitely suspending its controversial gold drilling project on Conglomerate Mesa, public lands located on the doorstep of Death Valley National Park. Tribes and other local groups are celebrating the news given the project posed a serious threat to Conglomerate Mesa’s ecological, cultural, and recreational values.

“Our heartfelt thanks to the many local residents, and diversity of supporters nationwide, who raised their voices with us to help fight this destructive extractive project that would have destroyed our beautiful lands to create profits for a private corporation,” said Wendy Schneider, Executive Director of Friends of the Inyo. “Make no mistake about it, this is a great day for people who care about irreplaceable public lands in Inyo County.”

K2 Gold cited a letter it received from the Bureau of Land Management (BLM)–a requirement thatK2 Gold complete an Environmental Impact Statement (EIS) before the project could move
forward–as its reason for suspending drilling activity. An EIS is a comprehensive document that
assesses the impacts that a federal action (such as mining, drilling, or other development) would have on the surrounding environment. Based on the letter sent to K2 Gold by BLM, the agency recognized the importance of Tribal concerns about the project and the significance of the biological resources on Conglomerate Mesa.

“Conglomerate Mesa will always be a sacred space to the Indigenous people of this area,” said Kathy Bancroft, Tribal Historic Preservation Officer of the Lone Pine Paiute Shoshone Tribe. “I
hope any future mining companies who pursue this project understand that we will always protect andcare for these lands. The first stewards of this land will never allow a gold mine at Conglomerate Mesa.”

The news that K2 Gold is indefinitely suspending drilling operations is a victory for efforts to protect the region’s cultural resources and traditional cultural use sites, scarce water supplies, wildlife and plants, and recreation opportunities. However, advocates also note that K2 Gold is just the latest in a series of large companies to threaten Conglomerate Mesa and be turned away by robust local opposition. Permanent protection of these public lands is an important next step in the effort to ensure Conglomerate Mesa and the surrounding Joshua tree-studded lands are here for generations to come.

Conglomerate Mesa comprises the ancestral lands and traditional territories of the Timbisha Shoshone and Paiute Shoshone Tribes. Conglomerate Mesa is used by tribes native to Payahuunadü, commonly known as the Owens Valley, and those in Death Valley/Timbisha for traditional cultural uses, including hunting, and pinyon nut gathering.

“This is great news,” said Barbara Durham, Tribal Historic Preservation Officer of the
Timbisha Shoshone Tribe. “We are very happy they are not destroying native lands because that is our history. We remember the old ones who walked the area. It’s good K2 Gold is gone so we can further protect our area and cultural landscapes.”

Conglomerate Mesa is beloved for hiking, camping, hunting, birdwatching, wildflower viewing, and stargazing. It boasts unique geological features such as fossils that help date the western coastline of the United States. It’s also home to sensitive plant species, including the Inyo rock daisy (which is only found in the Conglomerate Mesa area and was recently proposed for listing under the Endangered Species Act), the Badger Flat threadplant, and mature and juvenile Joshua trees.

“The vibrant and delicate ecosystem of Conglomerate Mesa is the big winner today,” continued
Schneider. “The bobcats, deer, lizards, Townsend Big Eared bats, Joshua Trees and Inyo Rock Daisies, all of the precious animals, plants and microorganisms that make their home there are safe for now. We celebrate this temporary victory today but move forward in our ongoing work to prevent future mining companies from coming to the Mesa.”

“The Inyo rock daisy and the other plants of Conglomerate Mesa are breathing a sigh of relief,” said Maria Jesus, botanist with the California Botanic Garden. “I am grateful to all those who helped us show the BLM that Conglomerate Mesa is such a vital habitat for plants that it warranted the highest level of environmental analysis. Conglomerate Mesa is their home and this special habitat cannot be replaced once it’s destroyed.”

“The health of our economic future is not in destructive mining but in ensuring our beautiful
surroundings are protected for future generations of residents and visitors,” said Coale Johnson, owner of the DeLaCour Ranch. “Together as a community, we can build an Inyo County economy that is not only sustainable but regenerative.”

For ongoing updates on the effort to protect Conglomerate Mesa, please visit
protectconglomeratemesa.com.

it’s not over a company backed by the likes of bhp rtz etc will come in and jump through the hoops since mid terms and a presidential election are not far off. BLM will bow to political pressure. The potential is great on the project the grade uncovered so far… Read more »

david taylor IMO,I highly doubt mid-term elections and/or the 2024 Presidential election(political pressure ) is going to over-turn this local decision. And if some big $$$ company with promises of “saving our economy ” or making the Tribe “rich”,we all know how those companies lie to try to profit themselves.… Read more »

[…] INYO COUNTY TRIBES, RESIDENTS, AND LEADERS WELCOME THE NEWS OF AN INDEFINITE SUSPENSION OF DRILLIN… […]

Are the same people also fighting the destructive mining operations that provide materials to make EV batteries? These mining operations are also known for using child and slave labor. A lot of these are in primarily black countries, that’s probably why.

What are you doing about it?

For starters, not buying a Tesla, volunteering in the community, donating to mission projects in effected nations, bicycle every where I can, buying American and local every chance, do my best to not support the global elite patriarchy.

Think Freer, I believe you have an appeal to purity there. An informal fallacy. Excluding a set of facts to prop up your assertion. That people don’t care about slave labor. At least some part of opposition is because of memory of slaves in gold and silver mines in California… Read more »

BOO-YA !!!!…I knew it !!….just like the Sarah Palin-led “Cougar Gold” operation was halted years ago when that company,first trying and wanting exploratory mining in the wilderness area and the Bodie Hills outside Bridgeport…next came the lies that go along with million $$$ mining operations,saying they’d “save the economy by… Read more »

This is such great news! The world doesn’t need more destructive gold mining in wild places. Thank you, Friends of the Inyo and local Tribal Nations, for leading us to this victory.