Manzanar National Historic Site teaches the history and lessons of Japanese American citizens and those of Japanese ancestry on the West Coast incarcerated in concentration camps during World War II.

Were the current Board of Supervisors actions to rescind the 80-year-old, WWII resolutions related to the Manzanar Concentration Camp and those of Japanese ancestry “Political Correctness” or simply “correcting the historical record?” Or were they rewriting history or simply an acknowledging the wrongs of the past?

At their meeting last week on April 20, 2021, the current Inyo County Supervisors took great care in not being critical of their board predecessors’ 80-year-old resolutions which were made during World War II largely because they acknowledged those early-1940s era supervisors were subject to their constituents and the emotions and thinking that existed at that time. The current board also did not wish to offend the relatives of those supervisors still living in the county. 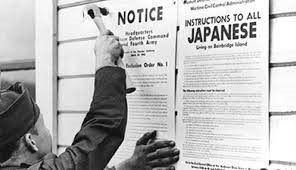 On April 7, 1942, the Inyo County Board of Supervisors approved two resolutions which opposed release of incarcerees from the Manzanar War Relocation Center, which was established as the result of President Franklin D. Roosevelt’s Executive Order 9066. That order authorized the removal and incarceration into military-style camps such as the one established at Manzanar, of more than 120,000 of those of Japanese ancestry along the west coast. Two-thirds of those incarcerated included American citizens in one of the largest violations of American Civil Rights in our nation’s history.

Many of the resolutions made by supervisors in the early 1940s were based on racism against Asians, wartime fears, and fabricated “facts” which would later be proven false. The supervisors protested, saying that the federal government must have exclusive jurisdiction over the camp, stating that local government officials felt that the incarcerees would overwhelm the county’s resources, making it impossible to meet the needs of its own citizens and residents.

In a May 3, 1943 resolution, the board called on state legislators to prohibit Japanese language schools in the state and to draft laws for people of Japanese ancestry, both alien and native born, “from using, owning, enjoying, or gaining any proceeds from agricultural land,” and ensuring “that all Japanese, both alien and native born, be forever prohibited from becoming citizens of the United States of America.”

Jeff Griffiths, Second District Supervisor and current board Chair brought the matter before the board noting that revisiting the issue of the past resolutions has been “in the works” for over the past year. He went on to say that the County of Los Angeles and the City of Bishop had taken action to rescind the old WWII resolutions of their own public officials.

Commission on Wartime Relocation and Internment of Civilians

The County’s board’s current resolution cites the 467-page report of the Commission on Wartime Relocation and Internment of Civilians which concluded that Executive Order 9066 “was not justified by military necessity but rather was the result of “race prejudice, war hysteria, and a failure of political leadership.”

Griffiths credited Inyo County Assistant Clerk of the Board and Assistant to the Chief Administrative Officer Darcy Ellis for finding the three old resolutions. Griffiths went on to say, that in his opinion, the old resolutions “…do not fit the (current) values of this board of supervisors and our Inyo County population as a whole and professionally the population of America and the ideals that we all cherish of equality and liberty for all.”

The discussion turned to how best to address the old resolutions. Jen Roeser, Fourth District Supervisor suggested rescinding them to “hope for healing and the hope for not opening old wounds and damaging scars and just offer healing and hope and asking forgiveness,” to which Inyo County Counsel Marshall Rudolph said, “sort of makes thing go away as if it never happened.” That was unacceptable, noting that his office had deliberately chosen the term “denouncing…because “you can’t unwind history and pretend this never happened.” Roeser suggested the term “rescind” rather than “denounce,” which was acceptable to the other board members.

The board heard from a former incarceree of the camp, a local historian, and Bruce Embrey, the co-chairman of the Manzanar Committee. Embry congratulated the board for taking action on the previous resolutions.

Agreed, Gene. Big or small, for the most part politicians are self-serving, posturing hypocrites. For years Mr. Griffiths et al. ignored my many letters trying to get the Board of Supervisors to even CONSIDER renaming Inyo County’s then-named Portagee Joe Campground (Google “portagee”). (The Board didn’t even acknowledge my suggestion… Read more »

Wow…Look who really had too much time on their hands.

Talk about “self-serving, posturing hypocrites” you fight to change the name of a camp ground to get the history to reflect the wokeness of today. Then put the hard working Supervisors down for correcting the mistakes of the past board from 80 years ago. So to me you were not… Read more »

I am so sorry you feel that way about my post. I did not realize I was being a “Troll” that can hardly read past the first sentence. I do have a high school diploma but like the majority of people I did not get a degree in superiority. So… Read more »

Sad that the Board of supervisors has so much free time to discuss the past instead of spending time on Todays current problems. All of you should be recalled for wasting tax payer money.