If you have ever visited the terminal at the Bishop Airport, you know that there is very little space for the passengers to sit. With air passenger service starting in the fall months, something needed to be done. The solution is for Inyo County to purchase a temporary structure to serve as passenger screening and seating areas for the commercial airline service to begin this winter. 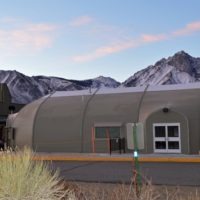 The Inyo County Board of Supervisors at Tuesday’s June 1 meeting authorized the purchase of a 50-foot-by-60-foot “tensioned fabric structure” for the Bishop Airport which is likely to look very much like the one currently in use at the Mammoth Yosemite Airport.

Public Works Director Mike Errante said the purchase not only is cost effective, but it lets the county to get a structure up in a timely fashion. And time is becoming a factor as the air passenger service is set to begin at long last in the winter.

Looking to the future, Errante said the county does have funds “to build a more robust terminal in about five years” using funding from the Federal Aviation Administration.

The dream voiced at many meetings for many years was for Bishop, and by extension, Inyo County, to have a commercial passenger airport, is finally about to be realized thanks to an FAA program put in place to make passenger service more readily available to rural areas and underserved parts of the country.

Inyo County and ICEA Sign Comprehensive 3-Year MOU
Do you still need to get tested for COVID-19 if already vaccinated? What CDC says…