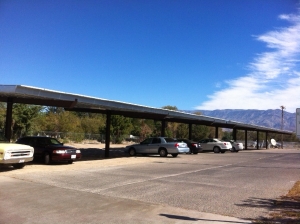 It started three years ago, and yesterday Inyo officials announced the completion of what they call the Independence Campus Solar Project. Deputy Public Works Director Jim Tatum said the solar arrays will save the County $414,000 in electrical costs in the first year of operation.

A big supporter of the solar arrays, County Administrator Kevin Carunchio, called it a “fantastic day for the County.” Tatum of Public Works said it was a three-way project with Inyo County, Solar City and consultant TerraVerde. The solar sites are located as large, shaded parking areas at the Courthouse Annex and the County Jail. Arrays were also constructed on the ground at the Juvenile Hall. All three projects generate a total of 429 kilowatts.

Tatum said Inyo County will get a projected rebate from the Department of Water and Power of nearly $1.37 million. The County also got a loan of $992,000 from the California Energy Commission. Those two amounts cover the cost of the project at just over $2 million. The first loan payment is due December of 2014.

Meanwhile, the County saves a projected $414,000 in the first year. Over the 25-year life of the project, the County savings is estimated at $2.4 million. The information generated by the project will also give Inyo County ways to conserve power. Supervisor Mark Tillemans said students at Big Pine Schools are looking at the Solar City website and coming up with ideas on how to save energy.

Tatum thanked numerous officials and workers on the team for this project. Administrator Carunchio said the balance of the project was on the back of Public Works employee Paul Hancock, who is now retired. Hancock attended the meeting and called it “an incredible team effort.” He said for Public Works, the project entered the realm of “herding cats. Thanks to department heads,” he said, ” it is a very satisfying and rewarding project and pretty cool.”

You are right, minus loan and interest repayments.
BK