By the end of last Wednesday’s discussion of the on-going Owens Valley Solar Energy Study in Lone Pine, it became apparent residents could easily eliminate any consideration of commercial solar energy development in the valley, thanks in large part to the 14,000-foot peaks that define the area. 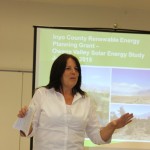 County planner Cathreen Richards described the project as a study, not a plan.

Helix Environmental is conducting the study of biological resources, funded with grant monies from the California Energy Commission. The two overlays to Helix’s geospatial data collection are viewshed and cultural resources, compiled from area residents and Native American tribes. As Cathreen Richards, Inyo County Senior Planner, and several of those in attendance, pointed out, a good case could be made for an aesthetic viewshed overlay extending from peak to peak. “Nowhere is there not a spectacular view,” Richards said.

Drew Wickman of Lone Pine suggested a discussion of scenic values, or aesthetics, could be highly philosophical. Robert Egerton of Helix explained the study would look at qualitative input “that can be quantified.” 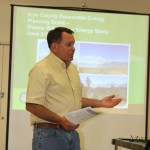 Richards stressed that the study would not necessarily lead to the same process the County just concluded with its passage of a Renewable Energy General Plan Amendment. “When we get to the end (of the study),” Richards said, “we can decide where we want to go from there…. This is a study, not a plan.”

The Owens Valley was pulled out of the County’s REGPA, which relied on data from the Desert Renewable Energy Conservation Plan, for future study. Last week’s meetings in Bishop and Lone Pine were the first public step in that study.

The Helix resource study is limited to the Owens Valley from the county line south to below Big Pine. The result will be high-res satellite imagery, to a one-meter scale, of the 185,000 acre study area, focusing on vegetation and followed up with boots on the ground. However, the viewshed, and possibly the cultural, overlay will extend to the Owens Lake.

The study will serve as a baseline, a snapshot of biological resources in the valley at this point in time. By late summer, Helix will have more refined mapping prepared. The County will meet with area tribes for input on cultural resources; the public is encouraged to provide information on scenic resources.

The Inyo County Renewable Energy General Plan Amendment has been selected to receive a 2015 Planning Award of Merit in the Innovation in Green Community Planning Category from the Central Section of the California Chapter of the American Planning Association.

The County was awarded a grant by the California Energy Commission to undertake this planning effort, which involved updating its General Plan to provide local input to guide the needs of the State and Nation to develop utility-scale renewable energy generation.

Through a community-wide effort, the County updated a General Plan Amendment that it had developed in 2011 and prepared a Programmatic Environmental Impact Report to identify the potentially significant environmental effects that could result.

The work involved the participation of a wide spectrum of stakeholders, numerous public meetings throughout the County, and detailed deliberations by the Planning Commission and Board of Supervisors.

The Renewable Energy General Plan Amendment was key in the Energy Commission’s recent decision to terminate the proceedings for the Hidden Hills Solar Thermal project in Charleston View, in southeastern Inyo County near Pahrump, and the withdrawal of the Northland Solar Photovoltaic project application near Independence.