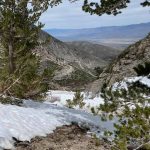 Updated: 5/02/2020–Eastern Sierra Avalanche Center posted a more detailed account of the Onion Valley Avalanche Rescue and conditions at the time of the  incident. Our thanks to “Comment” from Erik Simpson for sharing.

ONION VALLEY (above Independence), CA. April 29, 2020 – Shortly after 11:00am Inyo County Sheriff’s Dispatch received notification of an avalanche in the Onion Valley area. Inyo County Sheriff Jeff Hollowell and Sheriff’s Office Deputies were first to arrive on scene and provided first aid to the patients until the Inyo Search and Rescue team arrived. 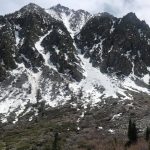 Onion Valley above Town of Independence

Further information revealed that two individuals from the Tahoe area came to Onion Valley to rock-climb and ski. The male/female pair set out around 9:30 a.m. to ascend, then ski a prominent canyon on the northeast side of Independence Peak, near the Kearsarge trailhead. After climbing for several hours they heard, then saw, an approaching avalanche. Both were caught up in the moving snow; the male skier was able to grab some rocks until the snow passed, while the female was carried out of sight down the canyon.

After the avalanche passed the male skier who maintained stabilization moved down the canyon and located his partner. Unfortunately her injuries were too severe for her to be carried out. CHP Central Division Air Operations (H-40) inserted one Inyo SAR member to the location, and the patient was hoisted by helicopter and flown to Southern Inyo Hospital for treatment. 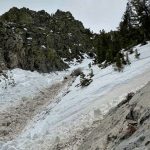 While we are grateful that these two avalanche survivors will recover, as a reminder Inyo SAR and the Inyo County Sheriff’s Office have released an official request for the recreating public to adhere to the current CA Stay at Home Order, and not participate in high-risk outdoor activities. If you get sick, lost or injured and require SAR assistance, the responding team of volunteers will have to break social distancing and State mandated Stay at Home Order by sharing rescue equipment, radios, and vehicles. You will be potentially taking those rescuers out of service for weeks due to post-mission quarantine protocols.

Funny how we are all so eager to bag on these two adventurers from Lake Tahoe. Recall that a few years back a very experienced local mountaineer took a group up to ski the lee/east side of Mt Tom after storm. Tragically, two of his party died, and another broke… Read more »

Doc
Don’t think anyone died with this avalanche.
When the story states the females injuries were too severe to be carried out,I highly doubt it meant they just left her there.
Sounds like she was airlifted to SIH in Lone Pine and treated.

Funny, I have found most Inyo county folks to be generous and kind.
These three remarks seem angry and mean spirited.
Read the article; their dumb decision to flaunt the rules, led to a persons death.
Not punishment enough?
Hmmmm

Fortunately, nobody died. The full story is here:

Thanks Eric to you and those at Eastern Sierra Avalanche .Org for this information and education of what you do so well. Hopefully this update will inform folks to learn more about their recreation and the issues needed to safely enjoy their days. Also as always, a thumbs up to… Read more »

The article doesn’t mention any such death. It’s not mean spirited or being angry to point out the truth, facts. The fact is that it’s very negligent, extremely bad decision making to head out at 9:30 am with obvious evidence of recent wet slides etc. as pointed out by Bob… Read more »

Especially with their reported late start time.
All of the facts you mentioned, then add the very late start…., negligent, bad judgement at the very least.

They need to be held accountable for their willful ignorance. Period.

Looks like a prime scenario to charge irresponsible decision makers for the cost of their tax-payer-funded rescue.

Should’ve stayed home in Tahoe.
I hope they get cited with a court appearance and get a nice big fine to help pay for their rescue.
Thank you ICSO, our great SAR team volunteers and of course the CHP.