It was a nice day for picketing as several dozen Inyo County employees let the public know they are not happy with the progress of talks with the County of Inyo after working the last three months without a contract agreement. Many of the cars and big rigs passing through town “honked” their horns and waved support to the union members. 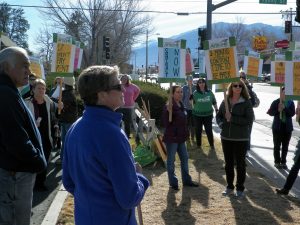 Unable to talk to the press while union negotiations continue with the County of Inyo did not stop three dozen union members that work for the County from using signs to let their feelings be known about how the direction of a new labor contract seems to be going—which appear to be at an impasse.

Several union speakers and local union supporters, including nurses from Northern Inyo Hospital who recently completed a successful contract with the support of the local County union, emphasized the importance of public services that make life in Inyo County safer and manageable. 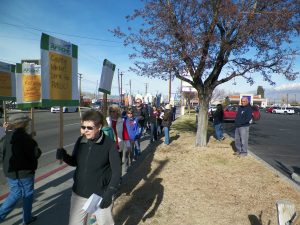 One sign mentioned an offer of a 1% raise, which obvious has only served to antagonize the County workers who claim that what amount to about a 15-cent an hour increase was insulting.

The purpose of the union members picketing on Main Street was to bring awareness that the unions and the County are in labor contract negotiations and the union would like the public’s support for “livable wages” that at least keep up with inflation. 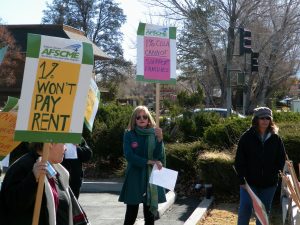 …Now I’m starting to worry….I’m agreeing with “Trouble” again…I do remember the days,back in the late 70’s,80’s and early 90’s when jobs offered free GOOD medical insurance….and paid a good wage to keep their employees working there…not the way it seems to be now…I know of employers in my little… Read more »

To me, low wages and corporate power are the two biggest problems we have in our country. Remember when companies used to offer profit sharing and paid for medical insurance. The working class is getting raped by corporate greed, in the name of stock holders.

Kyle….the same way I think about it too….only without the morning and afternoon weed getting me through my day..here in little ole’ Inyo County,won’t effect me in any way,other than when April 15th rolls around and not feeling too bad when I dodge,weave and lie about the money I make… Read more »

Who cares, as long as I get to Wake-N-Bake and afternoon 420 Bake every day, just to kill the pain of my bleeding Hemorrhoids, let them all drown in the Swamp, because the Swamp must be refreshed with the blood of Patriots and Tyrants from time to time, this is… Read more »

…yeah,”drain the swamp”…..the same as trump said he was “going to do”……take a look at who he’s hiring as “aides and advisers”,and you’ll see just ANOTHER lie and pulling the wool over the eyes of those that were fool enough to vote for him,thinking ANYTHING he said to get elected… Read more »

Drain The Swamp and let Them eat Cake, We already Pay toooo much Taxes and our country is turning into a Communist DictatorshipNo more GMO’s.. No more DMV.. No more Permits and Fees for everything

So basically, you want a giant Somalia here in the US?

Oh the irony in your comment is just too thick to cut with a knife. Glad you at least spelled american with a small “a” though. Fitting.

How about some news here instead of a puff piece. Did you reach out to the County to ask for information? What types of raises are workers in Inyo County looking at in general? Didn’t these union employees just get huge raises last time around? While we all live here… Read more »

Just to say about county employees raises your salaries are paid by the cigarette tax that was inscreased on the ballet. Since I smoke this interests me slightly. How do you think the aged of America drawing Social Security feel.. They received no cost of living raise in 2016. And… Read more »