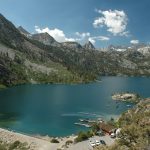 Lake Sabrina outside of Bishop, California

Apparently, based on comments by County Administrator, Clint Quilter, the county campgrounds might be open in two weeks, although it is not entirely clear “why” they cannot be opened immediately. There appears to be some concern by county officials with staying in compliance with Governor Newsom’s Executive Stay at Home Order limiting recreational and leisure travel, although it is being widely ignored as summer has arrived.

So, Inyo County, seemingly following in the footsteps of Mono County, has chosen “to put the cart before the horse” by opening the county to fishing, while leaving anglers and other visitors to the area to continue practicing dispersed camping, which threatens environmental damage, presents sanitation issues (no toilets, no trash collection) and an increased risk of wild fires early into the fire season from unregulated campfires.–James]

After the controversial and surprising decision on May 20 by the Mono County Board of Supervisors to open the fishing season by Memorial Day weekend on a 3-2 vote, attention has turned to the Inyo County Supervisors next board meeting on Tuesday, May 26. It is expected that the supervisors will approve a letter to the Department of Fish and Wildlife asking to open the fishing season as early as Wednesday, May 27.

On Tuesday’s Board Agenda, Item #14 “Request (the) Board consider requesting that the California Department of Fish and Wildlife open fishing season in Inyo County prior to June 1, 2020.”

The issue of where anglers and other visitors coming to the area will stay in the coming days with all short-term rentals and lodging still ordered closed by the public health officer’s order, combined with county, state and federal campgrounds also still closed, has not been addressed. Expect that to change quickly as both Inyo and Mono counties are working to have them reopened as quickly as possible given the circumstances. 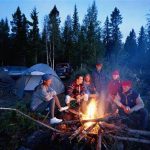 Dispersed camping is reportedly already rampant in both Inyo and Mono Counties, with people ignoring the governor’s Stay at Home Order. This influx of visitors from coronavirus hotpots such as Los Angeles and San Francisco has local health authorities genuinely concerned, fearing that the small communities of the Eastern Sierra will likely see a sharp rise in the exposure to the coronavirus, followed by an increase in the number of COVID-19 cases. 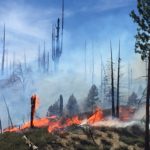 Fire officials and some forestry officials are concerned about camping outside of developed campgrounds that significantly increase the chance of wildfires that already seem to plague the state every fire season. The state’s peak wildfire season typically runs from May through October, but the fact is, wildfires can occur at any time.

With the rest of the state, and even other parts of the country, throwing caution to the wind, and reopening their economies, this season will either prove to be one of the best tourist seasons in the Eastern Sierra in recent memory, or the one seared in the memories of many as a time of “incredibly poor judgment” if there is a serious COVID-19 outbreak as a result.

Only time will tell.

It’s about time the county supervisors put on their big boy pants and make a decision that best reflects the community and supports the local business that desperately need the business. Now is Not the time to standby and wait for an invitation to enter phase 3. It’s in each… Read more »

Typical Inyo Supervisors. Either they arent very bright or they’re plain stupid. Its infuriating. This isnt about locals vs tourists, it’s about the long lasting damage that is being caused by dispersed camping, the creepiness of looking out your kids bedroom window and seeing RVs parked out on the street,… Read more »

How hard is it to wear a mask for a short time? Geez…..

Liberty You state “There will always be some who don’t follow the rules,but the vast majority do”. To say that,you obviously don’t live up here in Inyo or Mono Counties,and especially not now or during the tourism months. So now,your saying the “mask issue” is unproven by science ? I… Read more »

Unproven by science? That’s debatable. But forget that for a moment. If someone was walk up and cough or sneeze in your face, would your prefer they covered their mouth, or not? I know what my answer is. And I don’t see how wearing a mask during a global pandemic… Read more »

Charles O.Jones Your last sentence there,I agree with 100 %…. A public health crisis should not become some type of political statement,what and what not to do. But it seems,to a large degree, that’s what it’s become. A couple weeks ago,look at the protests in some of the states,wanting to… Read more »

“the biggest attack on personal liberty in 100 years” – ? seriously ? Are you seriously that entitled? Any chance you’ve heard of The Civil Rights act of 1964, The 19th Amendment, The Freedom to Marry Act, um, let’s see, those are just a few off the top of my… Read more »

After all you locals catch up all the trout paid for by licensing from all over the state. Please don’t cry when there is no money to stock more because us fat cat flatlanders didn’t purchase licenses. Enjoy barren lakes you really showed us.

Chris, It is not Naive. For the past 3 months, in a city of 80,000 people including the ederly, have been standing in very long lines at Costco and Vons to get supplies. Many visitors there passing through on business or to second homes coming from the large cities. Masks… Read more »

JKB ” The people at Hot Creek in the zoo, you Know to keep your distance from them, they will not be there long, it is their bad.” NOT NAIVE? Do you think those people just sat there until yesterday and then said yup it’s time to go home? Do… Read more »

Until there is a vaccine we’re all open targets. It isn’t going away, ever.

People go to the Sierra to isolate from people and be with nature. We all really need that….The campsites are far apart, campers bring their own food and needs with them. Trust that people know to safely distance from each other, and to wear a mask ,and gloves ,and sanitize… Read more »

This assertion is rather naive. A friend works at a walk up food establishment. Most of their weekend visitors are from out of the area and hardly any of them are wearing masks! Their opinion is, I’m clean, you don’t need to worry about me.” The problem is, being contagious… Read more »

Chris It’s become practically all political now. Most non-masking wearing people now saying “If trump tells me I don’t have to wear a mask,like he doesn’t wear one,I’m not going to “… But if trump did wear a mask,they’d follow along,like a little Lamb and wear one too.. This day… Read more »

Open campgrounds and facilities as well stage porta potties, bathrooms still closed in business. When it opens up it there will be a huge wave of people and we should be prepared.

Have you followed the news at all lately? People may know how to be responsible but acting responsibly, not so much. I stopped by the bridge over Hot Creek on the Owens River road Friday evening and it was a zoo. 20-30 cars and rv’s jumbled together, some parked close… Read more »

How is a family camping together different than them coupled up a home? Or fishing? Or hiking? The increased depression and suicide rates are very harmful also. Citizens can take precausions and get out of the house. Restrooms and parks need to be opened up along with restaurants and strip… Read more »

Either open or don’t, but please don’t open until people actually have someplace to go. Dispersed campers are driving on brush, building illegal campfires, leaving trash.

It was scheduled to open June 1st so opening the season 5 days earlier isn’t a big deal. That being said it would have been smarter if the fishing opener and the Camping/lodging, restroom/trash services could have been timed to open together as well. As it stands, our beautiful areas… Read more »