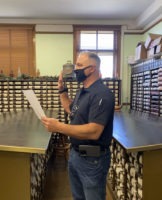 The meeting was a public format accessible via Zoom.

Four candidates applied for the position; one candidate declined to interview. Acting Sheriff Eric Pritchard was ultimately selected by the Board in a unanimous but extensively debated decision.

As a reminder for residents who may be interested in running for local office, all information regarding the filing period and June Primary Election can be found at the Elections Calendar webpage https://elections.inyocounty.us/voting/2020-election-calendar/

Congratulations to our new Sheriff, Eric Pritchard. From a small business and community standpoint, appointing the local undersheriff from within the department makes sense and hopefully, will help heal the community.