Coso Geothermal is the second biggest tax payer in Inyo County after the City of Los Angeles, so nonstop strife over Coso’s 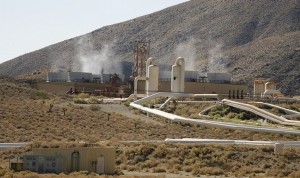 Inyo County Assessor Tom Lanshaw said that Coso’s assessed valuation was listed at $1.1 billion in January of 2008 after the purchase of the big geothermal producer. The value dropped to $790 million in January of 2009 and down to $713 million in 2010. Lanshaw said Coso officials have appealed both years and negotiations continue. The issue has not yet gone to an appeal hearing.

Lanshaw says Coso officials claim their big groundwater pumping project in Rose Valley in southern Inyo has not come through with enough water to increase their geothermal resource as planned. After a year’s review of pumping, the Inyo County Water Department, based on a re-calibrated computer model, okayed higher pumping for under three years.

Assessor Lanshaw told the Inyo Supervisors Tuesday that it’s “an ongoing, continuing appeal from Coso.” Lanshaw said the parties met last month on an almost weekly basis. Said Lanshaw, “I got made and said I would go no further down. It’s a stalemate.”

When questioned by Supervisor Richard Cervantes about the work done on this issue, Lanshaw said his department gave Coso an appraisal that they picked apart. “We just keep talking, and talking, and talking,” said the Assessor. “It’s a big, long negotiation.” County Administrator Kevin Carunchio said he totally concurred with Lanshaw. Carunchio said there is a difference of half a billion dollars in the disagreement.

At 1% of assessed value, taxes at stake add up to more than $15 million which goes to county government and special districts.

We work to provide daily news to all of the Eastern Sierra, in the tradition of Eastern Sierra News Service and the Sierra Wave. We bring you daily happenings, local politics, crime, government dealings and fun stuff. Please contact us.
View all posts by News Staff →
Mammoth Ambassadors of the Week: TK and Bigger
Music, food, history at Eastern California Museum in Independence