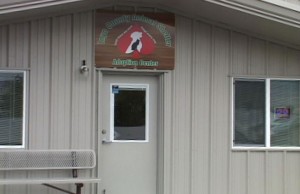 The contrast between the old and the new is stark. The cats have larger cages and access to their own play room; the dogs are housed in big cages with access to the outdoors and can romp in their own grassy playground. The facility has a “get-acquainted room,” a real office, climate control and ventilation, and an exam room; heaven compared to the cramped quarters the Sheriff’s Department Animal Services operation moved out of a few weeks ago.

“This started 19 years ago,” Shade, who with his wife Lisa started ICARE after a visit to the old shelter. Initially, the organization’s fund-raising efforts concentrated on an effective spay-neuter program.

Then two years ago, the new facility was proposed to the Board of Supervisors, built with a combination of donations and county funds. The annual ICARE dinner held in 2013 started the fund-raising effort.

The following year, the Lions and Rotary Clubs threw a hugely-successful spaghetti dinner. When all the eating was done, ICARE had raised more than half of the $800,000 needed for the facility. The balance of the building cost came from the county and the Sheriff’s Department including $150,000 from an anonymous donor.

The beneficiaries of the community’s generosity come in all shapes, sizes and breeds, gifted with pleasant living quarters until their adoption.