By News Staff on December 28, 2011 in Government Agencies/Utilities 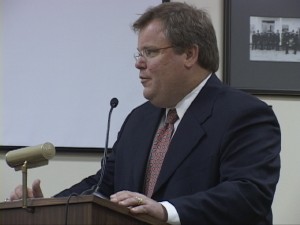 CAO Kevin Carunchio speaking to the Board in 2009, two years after he was hired.

In hard economic times, some Inyo citizens questioned the Board of Supervisors’ vote to give their County Administrator a roughly $1400 per month raise plus additional benefits.

CAO Kevin Carunchio went to work for Inyo County in 2007.  His contract allowed a re-evluation for more pay but he declined to take advantage of that stipulation.  This year, Carunchio did go for a pay raise.  The Board and Carunchio had met more than once in closed session.  Tuesday, the Board voted unanimously to raise Carunchio’s pay from approximately $11,787 per month up to $13,201. The Board also agreed that the County would match retirement contributions Carunchio makes up to 2% of his salary.

Supervisor Chair Susan Cash said Carunchio “has been working quite diligently for a number of years at the same salary we hired him in at as an inexperienced administrator.  He has proved his worth and then some,” said Cash.  She noted that Inyo County pays lower than surrounding agencies.  She called Carunchio a work horse.

We did speak with Carunchio who said the Board unanimously granted him what amounts to a 12% increase in pay and an additional retirement benefit. “Every dollar I put in,” he said, “they put in a dollar up to 2% of my salary.”

On the same agenda, the Board also considered creation of an Assistant County Administrator position and a Senior Deputy County Administrator with changes in job descriptions.  Carunchio explained that his own former Deputy CAO position has remained vacant and that current Deputy CAO Chuck Hamilton announced he will retire in April.  So, Carunchio said, he asked to recruit and fill just one of the two Deputy CAO positions. The job description will be broadened and Carunchio said he would look for people with the “strongest skill sets.”  The CAO also said that if he gets someone with ten years of experience, he would recruit for a high level position.

Asked to respond to public complaints about his raise, Carunchio said that he understands their perspective.  He said, “I consider myself extremely blessed.  I have a job I love in the place I love and work with good people.  I am also well compensated.”  The CAO said he appreciates the vote of confidence by the Board.

Asked about his benefits as CAO, Carunchio said he gets the exact same benefits as other county workers – medical insurance, 2% at 55 retirement, a life insurance package and deferred compensation.  Carunchio’s new yearly salary amounts to roughly $160,800, plus about 1/3 of that for benefits.  An amount, as others have noted, mostly lower than other administrators’ pay in the Eastern Sierra region.

Skier, What other counties do with respect to their CAO’s level of compensation is up to their own voters and elected officials. Very few jobs- if any- in the public or private sectors, are based on the “per capita” approach that you used. Compensation is usually based on the qualifications… Read more »

Charles James I agree with most of your statements. Except the part about not being able to put a price on it. If he created several hundred good paying jobs around here, then maybe I would agree. Tell then,no.

JJ, thanks for your comments. The subject of the appropriate level of compensation for public servants is an important- and long overdue issue- that needs to be addressed, along with many other issues on what is or is not the appropriate role and cost of government at all levels- local,… Read more »

Where is the “budget crunch”? Apparently not at the higher levels of Inyo County Gov. This amounts to 3%/year in salary for the years employed, but the 50% match for 457 contributions is where the county really gets socked. I’m pretty sure that the rank and file did not recieve… Read more »

Bingo!!! And the politicians, that are suppose to be serving the constituents, are paying KC off for the “servicing” he has provided them.

One day the Sheeple will wake.
And when they do.. it’s going to be Ugly.

Our county CAO Kevin Carunchio may not be perfect in the minds of some, perhaps even many, but the fact is that he is hardworking, puts in many, many hours, and travels many miles on behalf of the residents of our county. Does anyone really think that he has anything… Read more »

I’m not saying he’s not a nice guy, but that’s not worth $200,000 for a small county like this.What does he actually do? Puts in many hours and travels many miles to do what? Is Administrator a state-mandated position? Gee, how much tax money could be saved by eliminating positions… Read more »

or $42 dollars from each person in Mammoth each year
plus benefits of course.

And the benefit/contribution that he has currently made to the town…..wait….. what has he done for all that money?

He’s been making the same thing as the City Administrator of the City of Bishop. He probably deserves more for administering services in 10K square miles rather than 2 square miles.

Why not just double his pay.
It’s only money. And it seems the gov. Has plenty

Unless you’re dealing with the lowly worker, then there is no money even for cost of living increases. KC is nothing more than a “tool” for the politicians and the fact that they’re happy tells you that he is not putting the interests of the county first. The other clue… Read more »

If he is doing an excellent job for Inyo County (and from what I have seen so far that has been the case), then quit your belly aching. If you pay 1/2 that amount for someone less competent, then it will cost more money and hurt the County in the… Read more »

“I consider myself extremely blessed. I have a job I love in the place I love and work with good people. I am also well compensated.”

What more could you ask for, Kevin. Unfortunately, someone likely lost their $8/hr county job to pay for your well-earned raise. C’est la vie.

Interesting how the board decided to negate the insurance and cost of living increases for the local workers…… With the current trend with administrators, the lackies of the politicians, it’s no wonder that the Inyo Board proceeded as they did. With decisions like this it’s no wonder that pension programs… Read more »

Where are you, Up the Creek ?

Like I have been saying for years It’s all about Protecting your own,
Got to love it.