Any big-city transplant who wondered how they ended up in a 100-mile stretch of high desert without a Trader Joe’s needed to attend the official Inyo County 150th Birthday Bash held Tuesday morning on the steps of the courthouse in Independence. 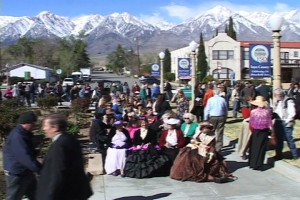 Where else could you find the history, the beauty, the warmth, the humor and class than on the front lawn of the County Courthouse, the air filled with a stiff breeze and the dulcet tones of the Lone Pine Pep Band? 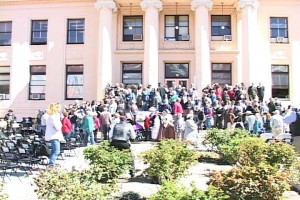 Following opening remarks by Board of Supervisor Chair Jeff Griffiths and the Pledge of Allegiance led by Smith, David Woodruff started the trip down History Lane in the person of Bill Chalfant, editor/owner/publisher of the Inyo Register. Woodruff stayed convincingly in character through the four hour party and pie social, the only give-away was his digital camera.

Judge Dean Stout provided a detailed history of the County Courthouse. The one he was standing in front of was the fourth, following the demise of the first three. For its time, Inyo’s courthouse was a shining example of fire-proof technology.

Following remarks from visiting dignitaries, Greg James provided a full history of Inyo and water, starting with the series of irrigation ditches built by the Paiute Tribes long before the white settlers showed up and ending with the tangled legal battles with the Los Angeles Department of Water and Power.

James served as the County Water Department director through the development of the Long Term Water Agreement and subsequent Memorandum of Understanding and still serves as legal consultant to the county.

The final featured speaker, Rob Pearce, grandson of A.A. Brierly, related more personal tales of growing up in the Valley. Brierly served Inyo County in a variety of positions, from Sheriff to School Superintendent to surveyor, for 65 years, in addition to running cattle. He retired at 85. Pearce would visit his grandfather’s office, flying paper airplanes out of his courthouse office, shooting cap guns with his brother in the hallways.

Apparently, Inyo County started out smaller in 1866 with boundaries just north of Big Pine and south of Little Lake. The folks in Bishop were Mono County residents but got tired of braving the trip to the county seat in Bridgeport during winter. Inyo bought what is now the northern portion of the county from Mono in 1870 for $12,000, paid in installments of $3,000.

Griffiths wasn’t entirely sure the debt was fully paid, so a big, fake check for $12,000 was presented to Mono County representatives. The southern triangle that includes Death Valley to Tecopa was given to Inyo in 1872.

The birthday celebration ended with remarks from the sitting Supervisors and a commemorative photograph of all in attendance on the courthouse steps. Then it was on to the Independence Legion Hall for a pie and ice cream feast.

In another 150 years we’ll have 10 new court houses and still no sidewalks. Happy Birthday!

Happy 150th Inyo County! I wish that they would have held this on the weekend so that the working people of Inyo County could attend…oh, that’s right, elected officials don’t work on weekends.