By News Staff on November 30, 2013 in Government Agencies/Utilities 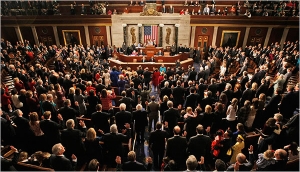 Imagine how we would all feel if members of Congress suddenly stood up and said things like “Two great issues which are fundamental are the inclusion of the poor in society and second, peace and social dialogue.”  Or, “How can it be that it is not a news item when an elderly homeless person dies of exposure, but it is news when the stock market loses two points?”  It would be shocking.  We would reel with amazement, gobsmacked with the knowledge that life as we know it was about to change.

Those quotes come from Pope Francis, not from John Boehner or Harry Reid.  Now, we’re not suggesting that Congress get religion.  They already play that phony card.  We in the Bureaucrat Beat Newsroom would give it a standing ovation if any of those elected officials fashioned a new platform on social equality.

They might give it a shot if pending legislation ever passes – bills introduced in the U.S. Senate in June to allow states and Congress to limit campaign financing.  It would be fun to see members of Congress publicly squirm over limits on their campaign dollars.  The current system of special interests with pay to play habits has been described as “legalized bribery.”

Speaking of those in need, we heard hundreds in our area have sought help with heating bills and funds have run out.  Good idea for the giving season – donate to Salvation Army and others who provide food and support for the truly in need.

Meanwhile, more cool words have floated into the Newsroom.  Troll.  You thought that meant an ugly little man who lives under a bridge?  Not today.  Troll is internet slang for a person who sows discord by starting arguments, posting inflammatory or off-topic comments.  We’ve seen some of those poke their noses into our website comments.  We just reach for the delete button.

Here’s another word described as British slang – shambolic.  We were all watching CNN’s Anthony Bourdain: Parts Unknown.  He’s a famous, if somewhat irreverent  chef who travels with a TV crew to lots of places and checks out life in general as well as food.  He recently went to Detroit (Wow.  80,000 empty buildings in the bankrupt city) and described the place as shambolic. That means disorganized or confused.  Sometimes our local officials appear shambolic.  You can surprise them with that adjective.

No surprise here.  DWP Commissioners voted to halt funding of two shadowy non-profit organizations managed by DWP and their union.  $40 million of ratepayers’ dollars has gone into the two alleged safety management organizations in the past ten years and no one has coughed up financial records to prove how it was spent.  Meanwhile, DWP spent $162 million on a new billing, metering and customer service computer system.  Yep.  Doesn’t work right.  Customers got huge bills, suffered rapid heart beat, stayed on hold at DWP for an hour and got no satisfaction.  The LA Times editorial pages advised the DWIP to hold off on nasty collections until they get their act together.  Next time DWP whines about spending money on the Owens Dry Lake, we might remind them of these two debacles.

Speaking of debacle, poor Alec Baldwin.  He’s super at comedy, but when he quits laughing he can get kind of nasty.  That’s what some paparazzi say.  As you probably heard, Baldwin shot off his mouth with a homophobic slur and MSNBC cancelled his new talk show.  Maybe he, Mel Gibson and Toronto Mayor Rob Ford can start a support group called Rant.

Fast food restaurant employees could use a support group.  According to the LA times, workers at mainly franchise eateries are paid near minimum wages “making them eligible for public assistance that totaled

an average of $717 million a year in California from 2007 to 2011.” Some call it public subsidy for private business.

Champion of the underdog, Bruce Springsteen will come out with a new album after the first of the year.  It’s called “High Hopes.”  Got to have that.  And, the smiley face of the news world, Katie Couric, will apparently become the Face of Yahoo News.  Stay tuned.

Since Los Angeles and the Eastern Sierra are joined somewhat like Siamese Twins, neither one really wanting the other, we do care about what happens to the Los Angeles Times.  A recent article says the company will “re-organize”, i.e. lay off lots of people.  Officials claim they will not decimate the newsroom.  We hope not.  We need to know what’s going on down there.

Where will the madness end?
Reply to  Art Guthry

I can hear it all now. At the next presidential debate, we’ll get to listen to some foam-at-the-mouth extremist screaming: “Liberals want to force us to get our guns and ammo overseas! Another crappy thing for the economy!”

The Washington Times is further right than Rush Limbaugh or Fox News. Hardly an unbiased source of information. The elimination of lead in ammunition is to protect apex predators and condors for lead poisoning after eating prey that has been shot with lead buckshot. It is a real problem for… Read more »

I was raised Catholic ( I’m a freethinker now) and went to Catholic schools. These were run by a fantastic group of nuns who the current church (excepting the current Pope) would think were downright subversive. They were into social justice in the biggest way possible, and they did their… Read more »

Pope Francis seems a good man and a breath of fresh air. What changes he makes that reflect the good hearts of most Catholics remains to be seen. Remember he is the figure head of one of the biggest and longest standing institution of political and financial power in history… Read more »

P.S. That picture of the Boss is as old as his last hit song.

Please tell me we won’t have to count on Fox for all of our national news soon? Holy Baloney Batman#@$!

Trouble……You got to realize on Christmas morning at 5 A.M. there are,unfortunataly some, that will want to hear about Bengazi,and how President Obama is a muslim and was born in Africa….

I just want to see his college transcripts. What’s he hiding?

No sweating
Reply to  Mark

When our so-called “conservative Americans” openly disclose their racism and fear of things beyond their comfort zone, I breathe a sigh of relief knowing full well this group of nervous people will always be nothing more than sad people in the extremist category waving their flags at everything.

Limbaugh speaks
Reply to  No sweating

Neoconservative heroes and spokespersons such as Rush Limbaugh continue to preach to their flock such things as: “The Pope is preaching pure Marxism” (as a rebuttal to the Pope’s comments about the growing inequality between Mega-rich and the poor). The deluded far-right must have not given any thought to the… Read more »

truly a laughing matter
Reply to  No sweating

And now its “The Pope is too damn liberal!”

From the horse's mouth
Reply to  No sweating

Meanwhile neocons who are sounding more and more like neo-nazis everyday ie., Limbaugh, Hannity, Palin, Coulter … are making it easier and easier for anyone who leans left to win elections.

Right! Got it! Obama is a Muslim Hitler who is going to turn America into a Socialist Communist Sharia ruled state so he can come for your guns because Obamacare. How can anybody not see this?

Ken….Let’s not forget how President Obama REFUSED to salute the American flag when he was sworn into office…..I didn’t get to see the ceremony,but heard that was said on FOX NEWS,so it must be true…and what your saying about taking citizens guns……so true…everytime I hear a knock on my door,when… Read more »

You guys better pull your tongues out of your cheeks pretty soon!!
BK

I just want to see his transcripts for Occidental College as we were there at the same time.

Why does Sierra Wave allow postings from liberals? Real Americans (we conservatives) believe in a White.Anglo-Saxon Protestant America. Period. It’s the way God wants it.
All liberals want is gay marriages, no guns, equality for non-whites, all that other commie crap.

This damn thing wont let me give myself a thumbs down.
Help me out.