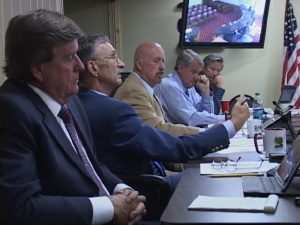 For nearly four hours, the Mono Supervisors held a discussion on June Mountain, the Mammoth Mountain land trade and a 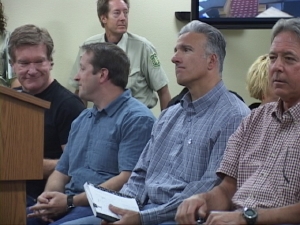 letter proposed to go to Mono County’s Congressional delegation. In the midst of it all, Mammoth Mountain CEO Rusty Gregory introduced his new management team.

Supervisor Tim Alpers had come up with a letter that he proposed the Board send to Senators Feinstein and Boxer and to Congressmen Paul Cook and Buck McKeon. The letter described the importance of support for a recreation corridor in the Eastern Sierra, including both Mammoth and June Mountains.

Citizens had tried to hold up Mammoth Mountain’s trade of land at the Main Lodge to pressure Gregory to re-open and improve June Mountain. Congressman Cook had issued a letter that said he would delay legislation on that trade. Tim Alpers’ letter offered support to the land trade but also a regional plan for the success of June Lake and its Mountain.

Rusty Gregory stood up to say the land trade had started long ago. He said only one thing changed – closure of June Mountain and “the tremendous acrimony that surrounds that.” He said the changes at Mammoth Mountain he had hinted at may have caused concern about his commitments to re-open June Mountain. Gregory then turned to his new leadership team to show that he was still on track with June. Gregory said, “I will continue as the CEO and an owner.” He said he would focus on bringing to the company the capital required and move out of the economic difficulties of the recent past.

Gregory underscored the bad drought years and disastrous economic meltdown that hit everyone hard. He said Mammoth needs to market June Mountain better, focus on families and the community. He said the company will give June Lake more resources. He said the new COO, Greg Dallas, would work to stretch overhead farther and stretch Mammoth resources to June.

Dallas himself said that Gregory gave the new team the power to position Mammoth Mountain in support of June Mountain. He said many resorts have multiple ski areas. Dallas said, “I have the ability to do efficiencies that have never happened before. There has never been this kind of synergy before. That’s how we will get profitable and grow June.”

Gregory said it is hoped that “We are heading in the right direction with June.” At the same time, he pushed for support of the Main Lodge land trade. In the end, the Supervisors voted unanimously to send Tim Alpers’ letter, and another brief letter supporting the land trade, to Mono’s federal legislators. The documents will come back for final approval at the Supervisors’ July 2nd meeting. We will have more from this information packed meeting on later broadcasts.

The way it is

In any company town, in any crappy economy, in any area that depends on the weather for its livelihood, you will find unforeseeable factors. My guess is Rusty Gregory and company know they can always depend on a skeleton group of visitors who have been visiting Mammoth Lakes for a… Read more »

mr behind the sceens

My advise to any real locals still living in Mammoth…GET OUT WHILE THE GETTINGS GOOD!

Ken Warner
Reply to  mr behind the sceens

Why? Are the Zombies and Vampires coming?

So no mention of Pam Murphy or bill Cockcroft, are they finally out of the picture

You make a very good point. Rusty got everyone focused on him with his weirdly bogus “I’m leaving” attention-grab.

Meanwhile, the real headline might be “Ding Dong the Witch is Dead.”

I think a more appropriate name for the area would be “the Eastern Sierra Stagnation and Buracracy Corridor”.

“Dallas himself said that Gregory gave the new team the power to position Mammoth Mountain in support of June Mountain.” Well that’s awesome! He’s giving the power to his employees to position themselves to support his OWN company. Brilliant! It’s also great to see that the Supervisors are going to… Read more »