By News Staff on October 1, 2013 in Government Agencies/Utilities 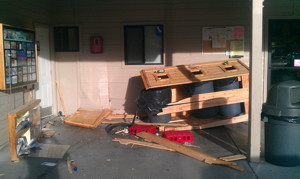 A man visiting the Eastern Sierra from New York “inadvertently applied the accelerator instead of the brake”, according to California Highway Patrol officers. The man ran into the front side of the Tioga Gas Mart in Lee Vining.

The CHP said that the Bishop Communications Center received a 9-1-1 call Monday morning around 7:30 that a vehicle had just collided with the front side of the Tioga Mart. A CHP Officer from the Bridgeport office arrived on scene and conducted a collision investigation which determined that the 62-year-old driver had applied the accelerator instead of the brake while trying to pull into a parking stall.  Officers said that there was minor damage to the front end of the 2013 Mazda and moderate damage to the building.  There were no injuries as a result of the collision. The driver was wearing a seat belt.