The remnants of a Los Angeles Aqueduct construction camp have produced insights into how the aqueduct workforce lived and worked, what they ate, smoked and drank, and how the physical layout of the camp itself reflected “scientific management practices” introduced in the early 1900s to improve productivity and control the diverse workforce. 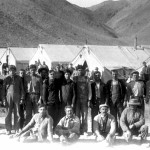 Aqueduct Camp: An ethnically diverse, mostly transient workforce built the LA Aqueduct and many workers lived in construction camps, such as the one shown here, located along the length of the 233-mile long aqueduct. Photo courtesy Eastern California Museum.

From April 1912 to February 1913, about 140 workers occupied the Alabama Gates construction camp, which consisted of 36 structures, ranging from wood cabins to canvas tents reinforced with wood frames and wood floors. The camp was located just north of the Alabama Gates, between the Aqueduct and the current highway, U.S. 395.

Excavation of the site in 1997 confirmed some historical accounts of life in the construction camps, but also contradicted some of the conventional wisdom about the aqueduct workforce.

For example, “whiskey built the aqueduct,” is one of more colorful quotes attributed to William Mulholland, the head of the LA Department of Water and the man who engineered and supervised the construction of the Aqueduct. But an examination of the Alabama Gate Camp’s refuse dumps suggests that alcohol consumption in this particular camp was relatively modest, by the day’s standards.

Archaeologist and historian Thad Van Bueren will discuss his work documenting and interpreting the site during a presentation Saturday, Sept. 28, at 7 p.m. at the American Legion Hall, at the corner of Kearsarge St. and Hwy. 395, in Independence. For information, call 760-878-0258. The presentation is sponsored by the Eastern California Museum and the Metabolic Studio. 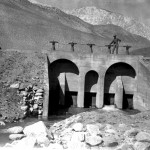 Alabama Gates: The workers in the Alabama Gates Construction Camp occupied the camp in 1912-13, and built the gates, above, and the concrete-lined section of the LA Aqueduct. Photo courtesy Eastern California Museum

Van Bueren published his findings in a paper titled, “Struggling with Class Relations at a Los Angeles Aqueduct Construction Camp.”

The organization and design of the buildings in the camp showed how “management,” namely the City of Los Angeles, tried to influence the work habits and lifestyle of the workers in the camp. Unlike work camps from an earlier time that were haphazard in their configuration, the Alabama Hills camp had an orderly and formal arrangement. The tents, which were all the same, standardized size, were evenly spaced and arranged in neat rows, with communal buildings separated from living areas. That uniform tidiness “set a clear tone of discipline and conformity,” Van Bueren writes.

The camp’s layout was part of the larger effort to institute “scientific management” that would change workers’ behavior on and off the job to promote regularity, timeliness and efficiency. A key management tool was creating specific job classifications that drove wedges between the various group of workers based on pay and other incentives. Thus, the highest paid jobs were dominated by native-born whites, while the lowest paying jobs were filled by foreign born men.

In addition, the camp was segregated into neighborhoods based on job assignments, social standing and marital status. The tents were occupied by the common labors, with each tent housing four men. The four wooden cabins were reserved for higher-paid supervisory or highly skilled staff, and made up a clear, “high-status neighborhood.” Not only were the cabins a good distance from the tent neighborhood and other buildings in camp, the cabins also were home to the few women and children in the camp.

That few families were in the camp reinforces the historical record that the aqueduct workforce sought short-term work, as workers would come and go as they found more attractive or higher-paying jobs. One interesting reason workers left the job involved immigrants from the Balkans, who left en mass for Europe in 1912 to take up arms in preparation for World War I.

The Alabama Hills workers were assigned the task of building the Alabama Gates, and digging and then lining with concrete the 30-mile stretch of aqueduct from the Gates to Haiwee Reservoir. The work was demanding, the terrain rough and records show men worked 10 hours a day on both the day and night shifts, despite the fact the state had passed an 8-hour work day law in 1909.

Back in camp, food was an issue. In 1911, there was general strike over food in the aqueduct work camps. In the Alabama Hills camp, Van Bueren concluded that meat from cows, pigs and sheep arrived at the camp already butchered, which is consistent with historical accounts. The meat was also of moderate to low quality, though, also confirming that poor food in the 58 construction camps contributed to discontent and high turnover among workers. In this Sierra camp, however, there was also evidence that workers’ supplemented camp food with wild game and fish.

Evidence tobacco and alcohol use in camp confirms and conflict historical accounts. Tobacco was widely used by all classes and residents in the camp.

But the refuse piles would suggest that alcohol consumption, while widespread and consistent, didn’t quite measure up to the historical record. Contemporary accounts include numerous statements about the large amounts of alcohol consumed daily by workers, who then couldn’t or wouldn’t work while “recovering.” It was also common to find workers drinking during the workday, and drinking all day during holidays.

In the Alabama Hills camp, Van Bueren concluded that consumption of alcohol was “relatively low when compared to the reputation of aqueduct workers.” While that might sound virtuous, there could be another explanation: ample supplies of alcohol could be found and consumed in Lone Pine, which was only three miles away.

By combining the archaeological record of the Alabama Hills Camp with the larger trends of the time and historical accounts, Van Bueren has created an interesting, account of what everyday life was probably like for a typical aqueduct worker toiling away in Inyo County in the winter of 1912-13.