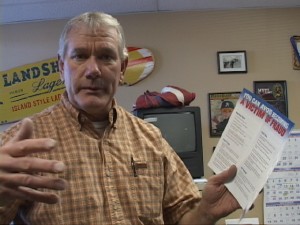 More than a few in the Eastern Sierra have received provocative letters from unfamiliar companies that claim they have won big cash prizes. The letters frequently require the recipient to send cash so they can receive their prize. Yes, it’s a scam.

Mammoth Lakes Police Officer Doug Hornbeck had some advice for everyone in the Eastern Sierra. In fact, the U.S. Postal Inspection Service has sent out fraud mailers to all homes in America. It’s a big problem.

Officer Hornbeck explained that the pamphlet going out reveals the warning signs of fraud. “You get a letter in the mail. They want you to send them a check. It’s just a big scam,” said Hornbeck. The officer said the website in the mailer includes a video that explains how the scam artists do what they do.

“They go how they commit crimes and get people to send them money,” said Hornbeck. He encourages citizens to check it out. So, don’t toss out the mailer when you get it. Go to the website. The address – postalinspectors.uspis.gov.

We work to provide daily news to all of the Eastern Sierra, in the tradition of Eastern Sierra News Service and the Sierra Wave. We bring you daily happenings, local politics, crime, government dealings and fun stuff. Please contact us.
View all posts by News Staff →
Dog Friends: Missy and Josie
Citizens Accuse Inyo Supervisors of Brown Act Violation