By News Staff on February 28, 2016 in General Misc. Stories
On Wednesday, February 24, 2016 at approximately 0046 hours, the Bishop Police Department received a report of vehicle on its side near the 500 block of North Main Street in front of the Bishop McDonald’s. 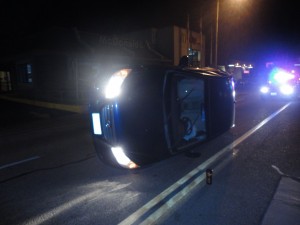 Bishop Police Officers and medics from Symons Ambulance arrived a short time later and located a passenger vehicle on its driver’s side and partially blocking North Main Street.
The driver of the vehicle, a 61 year old male from Reno, Nevada told officers that he became distracted by the vehicle’s navigation system which caused him to veer off the roadway and strike a light pole, in turn causing his vehicle to lose control and land on its side. 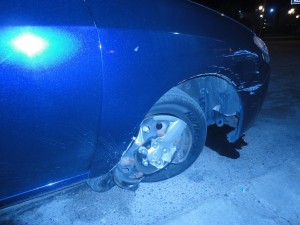 The driver appeared uninjured and was not under the influence.  He was treated and released by medics from the scene. With the assistance of Bishop Police Officers, the vehicle was returned to its wheels and driven away from the scene.
The investigation is continuing, and any one with additional information is encouraged to contact the Bishop Police Department (760) 873-5866.

I’m not sure what further information is needed, it sounds like a single car accident- case closed.