By News Staff on September 9, 2015 in Government Agencies/Utilities

Mono County, CA – It seems smoky, hazy skies have become the summer norm as ongoing, out-of-control wildfires burn throughout the Sierra Nevada region. But everyone who breathes local air should be encouraged by a forecast of much clearer skies and bluebird days ahead in the upcoming cold winter months. 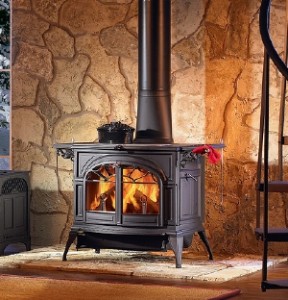 Together with precipitation (rain and snow) scrubbing smoke from the winter skies, hundreds of new heating systems throughout Mono County will create significantly less wood smoke than in winters past. Since late 2014, Mono County’s ‘Woodstove Replacement Program’ has replaced 103 smoky woodstoves and open fireplaces throughout the county with new, more efficient and significantly cleaner heating systems. In the same time frame, the Town of Mammoth Lakes changed out 145 systems in town through a similar program. Together, these 248 older and smokier wood-burning systems were swapped out for 76 new EPA ‘Phase 2’ wood-burning systems, 151 new pellet stoves and inserts, and 21 new gas heaters. And this follows the replacement of 140 other old wood-burning systems by recent Air District programs throughout the county and town.

While these programs have now closed with funding depleted, the 388 new heating systems in Mono County should noticeably lessen winter wood smoke by annually reducing TONS of air particulates (i.e., smoke). According to industry standards, an old, pre-1990 woodstove emits around 60 pounds of airborne particulates for every ton of wood burned (one cord equals more than two tons). In comparison, a new EPA ‘Phase 2’-compliant woodstove reportedly emits around 29 pounds burning the same ton of wood, while a new pellet stove emits about 3.5 pounds per ton of pellets burned. Gas heating systems are even cleaner.

Proven to directly impact human health, wood smoke is targeted by state and federal regulators for control and reduction as possible. Soot and airborne ‘particulate matter’ (PM) are of particular concern, especially particulates measuring from 10 to 2.5 micrometers (one millionth of a meter) in size. Because they’re so small, these minute particles, often referred to as “PM 10” and “PM 2.5”, are inhaled deeply into the lungs, leading to many detrimental effects.

Additional components of wood smoke and soot, including sulfur and nitrogen oxides (SOx and NOx), carbon monoxide (CO), volatile organic compounds (VOCs) and other reactive organic gases (ROGs), are also identified and targeted by air quality regulators as posing a threat to human health. In addition to humans, the surrounding natural environment, including animals and plants, is also impacted by wood smoke and other airborne pollutants. Wildfires aside, this means limiting exposures to wood smoke and other airborne pollutants is the wisest choice whenever possible.

Funding for all of the replacement programs was provided through agreements between Great Basin Unified Air Pollution Control District and Los Angeles Department of Water and Power surrounding local air quality impacts from the dry Owens Lake bed. Most recently, an early 2014 agreement provided Great Basin Air District board member agencies, including Mono County and Mammoth Lakes, with settlement funds to directly pay for air pollution prevention programs within their territories.

As calculated on a per capita basis, Mono County was allocated $193,936 of these “Environmental Public Benefit Funds,” while the Town of Mammoth Lakes received $274,963. While either could have chosen to augment their tight budgets by using these funds for internal benefits tied to air pollution like buying new and cleaner government vehicles, both agencies instead chose to directly benefit everyone in the region by spending their EPBF windfall entirely on woodstove replacements for local property owners. Local, qualified businesses contracted to provide the new heating equipment and installation services were also directly benefitted by increased revenues.

To help stretch the available funds and install as many new systems as possible, property owners were required to share some job costs, with total amounts driven by vendor and equipment selection, install requirements and personal choices.

As a strong supporter of the County’s Woodstove Replacement Program, Lynda Salcido, Mono County Public Health Director and interim Chief Administrative Officer, noted, “Anything that reduces particulates, particularly in cold weather, is essential to our local air quality during those months. …Because of the health impact [from wood smoke] on the most vulnerable, including the young, the elderly, and anyone with health issues such as asthma and respiratory problems, indoor air quality will be even more important this winter if El Nino comes to fruition as predicted, leading to more wood burning over a longer period of time.”

In addition to replacing old equipment with new heating systems, wood smoke from woodstoves and fireplaces can also be reduced by other means, including burning only seasoned, dry wood (the harder the better), ongoing equipment maintenance and upkeep, and proper burning techniques. For more information, go to:

Not surprisingly, the Hearth, Patio and Barbecue Association (HPBA) has been mounting a campaign to convince policy makers that the answer to wood smoke is to sell more of their product, not less. Below are eight reasons that policy makers should not accept this rationale. 1. EPA stove performance in… Read more »

Am I allowed to suggest using dynamite Ken?

Inappropriate Trouble, but funny.
Certainly much more appropriate though, than Dr. Moench’s blatant heat pump sales pitch.
How about: new construction and remodels have to be built more energy efficient! Oh, that’s right, if we built better buildings, we wouldn’t need to burn wood OR buy energy consuming heat pumps.

I agree Russ, I probably shouldn’t joke around like that.
I think the doctor makes a few good points, but I believe better insulated houses is probably the best way to protect against the weather and outside smoke.

I don’t have a problem with your sarcasm Trouble. I enjoy it. You might have noted that you are, generally, the only pseudonym posting here that I respond to. You do not abuse the “anonymity” as a shield to snipe at others. A major issue that the sales pitch below… Read more »

Speaking of smoke. Is there anyplace to find the air quality In Bishop on these dark days?
All I know is my chest hurts when I’m mowing the lawn

Palmdale, but than you’d need a bullet proof vest.

You get irritated pretty easily anyway, don’t you Ken?

Is their ever going to be a way to force reluctant property owners to replace their old stoves with new? There are a lot of property owners in the Getto that haven’t taken advantage of this very meaningful program. I live right next door to one and at times the… Read more »

you probably know this Ken, but when a property changes ownership, the new owner is required to replace any non-EPA stoves within a certain period of time. In my experience, ToML is enforcing that. Of course, any cash cows that haven’t changed hands in a long time have no such… Read more »

I don’t think anyone should force anyone to do anything with their property unless it’s a fire hazard.

When I’m pushed, I push back.