Proposed changes to fishing regulations and seasons have drawn a local response mostly against the new rules. 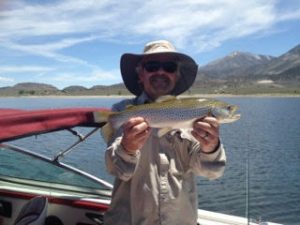 Here are two previous stories from Sierra Wave Media, and a letter to the California Fish and Wildlife Department; also included is a link to comment:

First, eliminating opening day will negatively impact the economy of the area especially in Inyo County. Inyo County is a tourist-based economy that depends heavily on fishing.  Opening day represents, as reported by many of our local businesses, between 20 and 30 percent of businesses annual income. The potential for recovering the money not spent in Inyo County by opening day fishermen throughout the remainder of the year is questionable and a risk that is too great for the local economy to absorb. Opening day has become a tradition for many groups and families who look forward to the thrill of opening day.  Without the incentive of the “event” the Commission is concerned that at later times in the year, other vacation opportunities and activities will take precedent and the money that would have been generated on opening day will be lost.

Secondly, the Commission does not support making Crowley Lake open to fishing year-round.  This is one of the largest and most highly impacted fisheries in the Eastern Sierra.  Year-round fishing will put a strain on the fishery and not provide any time for habitat and resource recovery which is essential.  Additionally, there are safety concerns with comingling waterfowl hunting and fishing on Crowley Lake.  Having waterfowl hunters and fisherman in such a confined space on the same body of water poses a public safety problem that will negatively impact our local law enforcement.

Third, the Commission has concern for angler safety if the waters in Inyo County and the Eastern Sierra are open year-round.  The lakes in Inyo and Mono counties freeze in the winter.  These frozen lakes are usually covered with snow as are most of the access roads to these lakes.  The number of Fish and Wildlife Wardens in the Eastern Sierra is very limited.  These dedicated law enforcement officers do an outstanding job of providing public safety during fishing season, during hunting season and throughout the year.  The Commission believes that the influx of year-round fishermen will diminish the ability of the Department’s wardens to provide adequate public safety as a result of competing wildlife disciplines, i.e., fishing, waterfowl hunting, and deer hunting.

I strongly opposes the proposal to open Inyo County and the Eastern Sierra to year-round fishing and askes that the State Fish and Game Commission and the Department of Fish and Wildlife consider the concerns addressed above and protect the Eastern Sierra fish and wildlife resources, by maintaining the established fishing season beginning on the first Saturday in April and ending on the 15th of November.

This is the email address to California Fish and Wildlife Department:

This is the email address to the California Fish and Game Commission:

Send comments to both

I like you Joe and would probably vote for you if you were in my district. But I still don’t understand why you are so against this? We already have year round fishing in the Owens and our local business counts on it. I could go on.But to me ,… Read more »