By News Staff on November 15, 2012 in Government Agencies/Utilities 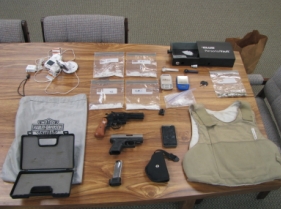 I found the story mentioned above … This is very sad .. the native community is personally effected by this, this is their connection to their ancestors. For all of us native and non native alike, it is a connection to our past … and people who were before us.… Read more »

With all your input, I am assuming a majority of y’all who commented on this story is a local in the valley. So with all the input I just read it is even harder to believe that it isn’t a easy job figuring out where the drugs are coming from… Read more »

I suspect Jerry .. that the answer to your last line is .. they are surveilling … trying to get the bigger fish. I remember a few years back .. there was someone down the street from us selling something (drugs). There was a fair amount of traffic most days… Read more »

Wow, that meth is of the devil, poor bastards that are addicted to it.

Nice bust guys! Maybe the crooks will get smart and move to Mammoth since there will be no narcotics officers in Mammoth soon. Maybe they can get a deal on some low cost housing when they move up.

Meth is the scourge of the earth ….with all of these felonies added up, this idiot should go away for at LEAST 10 years, anything less, there’s something seriously wrong with the court system.
P.S….I’d bet my next paycheck that both of those guns are hotter than Badwater in July.

GOOD JOB INET !!!!!!….Guns,drugs and a couple of dope dealers off the streets of Inyo County.Now we can only hope,since this isn’t their first brush with the law,the courts will do a better job with conviction and punishment this time around….