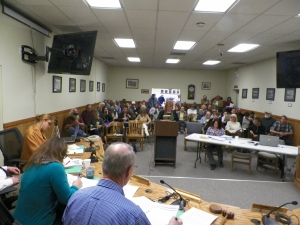 With passion and relentless opposition, an estimated 70 or more people objected to the Inyo County Planning Commission’s request for approval of a draft Renewable Energy Development General Plan Amendment. After more than three hours of virtually all public opposition, the Commission voted  to send the plan on to the Board of Supervisors amidst groans and shouts in opposition to that vote. One Commissioner, Bill Stoll, voted to hold workshops first.

The room was packed and initially some people sat out in the hall, so insistent were many to be heard. More than 30 people spoke. All but one objected to the some 14 proposed Renewable Energy Development Areas from Laws, to Independence to Deep Springs and Death Valley. The proposal supports industrial-scale solar and wind development in these areas. The plans will have to go through an environmental review process, but 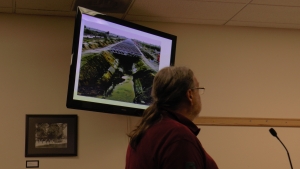 Paul Freitheim suggested a solar canopy over the aqueduct. (Photos by Russ Monroe)

the public was in no mood to let it go any further than the Planning Commission.

Testimony ranged from heart felt and poetic words to accusations that the Planning Department had misrepresented the will of the people. Paul Freithiem showed slides of the beautiful valley that would be, as some said, marred with huge solar arrays. He proposed a solar panel canopy over the aqueduct to avoid impacts in the Valley. Bryan Kostors accused the plan of saying that the public supports these developments when in fact they do not. Several people brought up this same 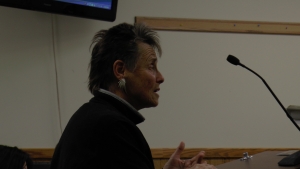 Cindy Kamler of Eastern Sierra Wildlife Care said she was speaking for the animals. Said Kamler, “Displaced wildlife is dead wildlife.” All of the large solar arrays would clear cut square miles of habitat.

Mike Prather said the areas designated for potential projects would impact the entire Lower Owens River Project, designed to bring back river habitat and not for industrial development. In closing, Prather said, “The real issue is the City of Los Angeles.” It was LADWP that proposed a 1200 acre solar project south of Independence and across from Manzanar. 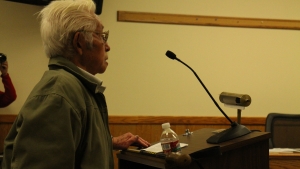 Hank Umemoto, an internee in Manzanar.

On that note, a half dozen Japanese-Americans objected to the County’s plans for widespread energy development. Hank Umemoto had been imprisoned in Manzanar in the 40s. He said LADWP turned the Owens Lake into a “Devil’s Playground”, which, he said, they now want to do next to Manzanar Historic Site. He and others talked about the desolation and despair of the original Manzanar camp and how development near it would destroy that memory that they have tried to preserve.

April Zrelak said the planners were trying to “hold the people hostage to an artificial deadline.” The proposed plans came out last week and include 358 pages of information. People asked for workshops and a chance to understand all of the details. Planning Director Josh Hart said that would happen during the environmental process. The Commission voted 4 to 1, with Bill Stoll voting no in favor of workshops, to accept the plan and send it on.

Now, the controversy goes to the Board of Supervisors with a good section of the public more outraged than before. You can check out public opinion letters on our website and at www.deepestvalley.com.

DRECP needs to be stopped!! I am in the high desert of San Bernardino County not far from Joshua Tree National Park. There are currently over 30 renewable energy projects in our county building dept dept awaiting approval. Unless DRECP is stopped our entire pristine desert is going to be… Read more »

Right On Rick!
Thanks for speaking up.
Mongo I

What part of NO we don’t want it do they not understand? Are these people elected?

As “ugly” as this meeting became, it was a great example of just how messy a democracy can be when passions are inflamed. Our politics in general seem to reflect the extreme polarity on issues, almost any issue, that comes before the public. It can be very confusing and it… Read more »

Thousands of folks who live here do support solar and the assumption that opponents of the solar farm are in the majority is a classic example of tactics that enviro advocates use to mislead and distract from the real issues. Most peole trust their LOCAL govt. to look out for… Read more »

A couple of important points:

1. The projects are subject to CEQA, not NEPA
2. The REGPA is proposed in Inyo County, not Mono County

You all know that, or should.

While 70 people showing up for usually uneventful Planning Commission meetings is a sizable number and its good to have that many people wanting to involve themselves in the process; the other 20,000 people of Inyo County who didn’t show up either don’t care or want such a designation. It’s… Read more »

The fact is, we don’t know how the people who did not attend the meeting feel.
BK