You don’t mess with the Independence tree people. They remember when the community had a lot of trees and are determined to protect those that are left. 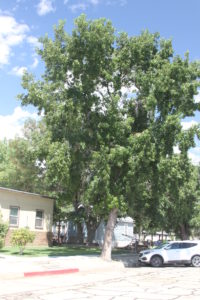 Doomed liquid amber in front of the County Water Department office on Jackson.

Tuesday, they joined forces to protect seven liquid ambers whose heads were on the block. The tree people succeeded, steering the Inyo Board of Supervisors and Public Works staff to let all seven survive until the County comes up with a formal tree policy.

The Indy Seven, one in front of the Water Department on Jackson Street, the other six at Webster and Main, were getting disruptive—lifting sidewalks, possibly cracking a block wall, dropping limbs and invading a backyard.

Public Works called in an arborist, Eastern Sierra Tree Service, who concluded liquid ambers weren’t really the best choice for the locations they ended up in. The trees’ fates were on the line at last week’s meeting but the Board opted to continue the discussion until this past Tuesday to let the public, who had sent e-mails of protest, come and speak.

Speak they did. Annette Wood quoted Dr. Seuss’ The Lorax. Mary Roper offered to sweep the seed pods off the Jackson St. sidewalk if it would save the tree. Earl Wilson blamed the cement. “Streets have been moved too close to the trees.”

Nancy Masters explained Indy didn’t have a tree problem, it had a water problem. At one time, she said, both the Los Angeles Department of Water and Power and Inyo County had a tree watering program that stopped in the early 2000s, but perhaps the new flat water rates would encourage homeowners to water.

The owner of the property at Webster and Main, Denise Manger Kellum, said she didn’t really want the trees to come down. They were causing issues and hadn’t been adequately planted or cared for. She suggested a root barrier to keep the roots from spreading into her yard.

Supervisor Mark Tillemans, whose district includes the trees, opened the discussion asking the County to hold off until community outreach and a formal tree policy was developed. The rest of the Supervisors agreed.

Then the Board got into some of the complexities of a tree policy, especially in regards to trees planted by the County technically within residents’ yards.

It was apparent the Board wasn’t eager to continue to act as judge and jury for future tree issues.

Thank you Board of Supervisors, sidewalks can be repaired, trees can’t be brought back to life and take years to grow.