The fate of three Inyo County water systems has lingered in a strange limbo for more than a decade. All three transferred by DWP to Inyo County government under the Water Agreement. Now, the Independence Community Service District Board has taken real steps to acquire their town’s water setup. 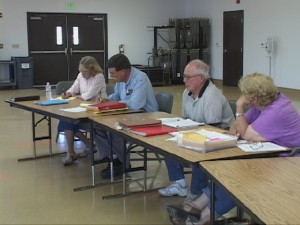 At a meeting of the Community Service District Board Tuesday, County officials and a couple of citizens sat in the audience – there to hear about the Board’s plan to move ahead with acquisition of the system. Inyo County Administrator Kevin Carunchio said he was “thrilled with the course of action” and said the County wants the district to succeed. He and Public Works Director Ted Pederson said they would work on a draft Memorandum for the transfer.

Asked if the community would learn about the costs of such a plan, Board members said that they would prepare detailed information and hold public meetings to go over the information so Independence residents know what to expect.

Board Chair Joe Andrews did say he fully expects the need for rate increases, but perhaps not immediately. Andrews said, “There’s no reason we wouldn’t be successful. This community has always paid its bills and we could keep the funds in our town.” Andrews added that the system has to pay for itself. Those critical figures are not yet available.

The shrinking population and town in general have raised deep concerns for some that the community can’t sustain operation of its own system financially or with necessary volunteer help now and in the future.

Andrews said that the County has discussed offering a loan if any disastrous problems develop with the system. Andrews added that 46% of the system is new.

County officials said they still plan to do a rate study on Independence, Lone Pine and Laws. Officials added that the State Department of Public Health will require a financial assessment of the system before it can be transferred from the County.

Board members expressed complete confidence in the town take-over of the water system. Members of the community have asked about the costs now and in the future and about the actual state of the system. Asked if the three systems are losing money, Public Works Director Pederson said, “There is not sufficient revenue.”

The CSD meets once a month and will discuss this issue at future meetings.

We work to provide daily news to all of the Eastern Sierra, in the tradition of Eastern Sierra News Service and the Sierra Wave. We bring you daily happenings, local politics, crime, government dealings and fun stuff. Please contact us.
View all posts by News Staff →
Hantavirus Case Confirmed in Mammoth Lakes
Three-Year-Old Drives Car into Ditch