As the Independence Community Service District struggles to move forward to assume the town water system, board membership has changed. 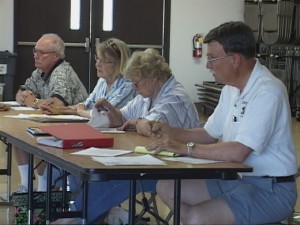 At a regular meeting Tuesday, the Board received Dean Loder’s resignation. After many years of service, she will step down at the end of this month. The Board appointed Jim Stroh of Independence who has taken a great interest in the water system and activities of the ICSD. One more board member is needed. Those interested can contact any one of the board members – Arlene Grider, Joe Andrews, Art Lacuse or Jim Stroh.

Independence voters formed the District ten years ago, and it’s been a long difficult process to get to the appointed task of the District – operation of the water system. DWP formerly owned and operated the system but wanted to hand it off to Inyo County as part of the Long Term Water Agreement.

Inyo County wants to pass on the system to the District. Residents of the dwindling town of Independence have voiced a need to know more about the finances and realities of operation of the water system. Some fear that the town’s people are aging and diminishing in number, which might leave the community vulnerable and unable to support the water system. District Board members continue to say they feel confident the town can operate its own water system.

At Tuesday’s meeting, board members talked to Inyo Public Works Director Ted Pederson about the County conducting a rate study and about the water system transfer process. Officials have said they fully expect rates will have to go up if the ICSD takes on the system.

The County and District will have to come up with a technical, management and financial document that spells out the details of the system and how it will be run and funded before there is a transfer. Board members have said they will share this information with the public before they assume the systsem. The State Department of Health must also approve the TMF document.

We work to provide daily news to all of the Eastern Sierra, in the tradition of Eastern Sierra News Service and the Sierra Wave. We bring you daily happenings, local politics, crime, government dealings and fun stuff. Please contact us.
View all posts by News Staff →
Inyo-Mono Health Officer Urges Vaccination in Face of Whooping Cough Epidemic
Animal Planet Show Means TV Exposure for Mammoth Lakes