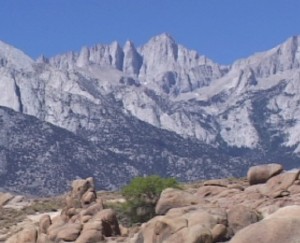 UPDATE 10-22-10: Sequoia and Kings Canyon National Parks reported that the father and son missing have been found. The two men, Sina Sadeghi Baghsorkhi, 27 of Wisconsin, and Abdolreza Sadeghi, 56 of Iran, walked out on park trails in the Cedar Grove area, which is approximately 50 miles away and far from their original planned route.

For more than three days, three hikers from Nebraska went missing in the Mount Whitney area. During that time, one of them texted his wife that the three had gone into the historic shelter near the top of Whitney. Thursday, the Inyo Search and Rescue sent in a helicopter and pulled the three men out of the snow and cold. At last word, two other men in a separate case remained missing. Weather remained a big obstacle to searching.

Inyo Sheriff Bill Lutze confirmed that Inyo and the Sequoia Kings rescue team went to work on this case. The three missing men had been part of a group of 8. When the weather turned bad with white-outs and three feet of snow at the start of the week, five of them decided to leave the Sierra. The other three vowed to go on to the top. The wife of one of the hikers had some word on Tuesday but nothing after that. Some 45 people on both sides of the Sierra worked to find the men.

Terry Waterbury, Search and Rescue coordinator for Inyo, said that the team got a Chinook helicopter form the Stockton Army National Guard. The weather broke enough Thursday for the chopper and Inyo team members to swoop in and bring out the three hikers. One of them went to Southern Inyo Hospital.

The three men are Phillip Michael Abraham, 34; Dale Clymens, 45; and Stevan James Filips, 43. It was Abraham who sent a text message to his wife on Tuesday. They have an 11 month old child.

While the good news of the three men’s rescue relieved searchers, they still had work to do. Two other hikers from remained missing. A father and son failed to come out of the mountains on Tuesday. Sequoia Kings National Park said that the missing men are 27-year-old Sinh Baghsohi, 6’5″ tall and 287 pounds and his father, Mr. Baghsohi, Sr. approximately 6′ tall and 180 pounds.

Coordinator Waterbury said the son is from Wisconsin and his father, visiting from Iran. As a kind of family reunion, they decided to hike Mount Whitney. Waterbury confirmed that their car remained at the Whitney Portal trailhead. Sequoia is in charge of the rescue with assistance from Inyo, Yosemite and Los Angeles teams. Waterbury said that on the eastside they have an Air National Guard chopper and teams ready, but the rough weather continued to hamper rescue operations. They planned to go in, weather permitting, early Friday morning.

We work to provide daily news to all of the Eastern Sierra, in the tradition of Eastern Sierra News Service and the Sierra Wave. We bring you daily happenings, local politics, crime, government dealings and fun stuff. Please contact us.
View all posts by News Staff →
Photo Fundraiser for ICARE
Mammoth Town Council To Look Into Higher Court and Bankruptcy in Case of Hot Creek Loss