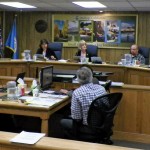 On Monday night, Jan. 26, four of five councilmembers voted to approve a “Motion for Resolution” to have the national motto, “In God We Trust,” displayed above the Bishop City Seal in the council chambers.

There was overwhelming support from those in the audience, comprised of mostly local clergy and church members− many were fellow churchgoers of the councilmembers voting “Yes.”

But not every council member was on board with voting “Yes.” Councilwoman Karen Schwartz voted “No,” telling fellow councilmembers, “I think we have a responsibility to all our resident to make our town seem inclusive and it (In God We Trust) seems like something that would exclude or divide the community rather than bring the community together.” 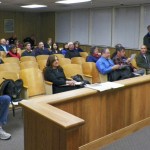 Only one speaker spoke against the idea during public comment. Former City Councilman Keith Glidewell reminded the Council it had turned down a similar proposal a year ago, saying, “This is a publically, taxpayer-funded public forum where people of all faiths and non-faiths, nationalities, and ages come together to participate in public business.”

He went on to say “Your support alienates those of us that do not believe in a God. We feel different and apart; not a ‘part of the Club’” said Glidewell, noting that accomplishments, values and morality are not only to be found in religion or belief in a God.

Several local pastors spoke in favor of the motion, as did others.

The Council was asked, given the short notice, to give the public more time to weigh in on the issue, but the idea was rejected. Councilwoman Smith said that she heard the meeting announced repeatedly on a local radio station and that it was published in the Saturday Inyo Register newspaper. It was true that it was published in the local newspaper, but only two days before the meeting.

“And this be our motto: “In God is our trust,” is found in the National Anthem, adopted in 1931. “In God We Trust” has been on U.S. coins since 1864 and on currency since 1957. And “…one nation under God” was added to the National Pledge of Allegiance in 1954 in response to the Communist threat of the times.

On July 30, 1956, “In God We Trust” was designated as the national motto of the United States.

The use of the word “God” has faced several lawsuits over the past forty-five years and consistently lost. In 1970. The U.S. Court of Appeals ruled that the national motto “has nothing whatsoever to do with the establishment of religion. Its use is of patriotic or ceremonial character and bears no true resemblance to a governmental sponsorship of a religious exercise.”

In 2004, this one over the use of the word “God” in the Pledge of Allegiance, the Supreme Court ruled that these acts of “ceremonial deism” are “protected from Establishment Clause scrutiny chiefly because they have lost through rote repetition any significant religious content.”

Before the vote, City Attorney Ryan Jones informed Councilmembers prior to their vote, “There is no real legal issue under the Establishment Clause, but if changed in the future, we’ll have to deal with it then.”

If the City of Bishop approves the resolution at its next council meeting, it will join 110 municipalities and counties in California that have given approval to the national motto being displayed on or in a public building.

Seems like a lot of you could use a little God in your life.

Read John Adams’ essay “A Dissertation on the Canon and Feudal Law” or James Madison’s speech to the Virginia Legislature titled “A Memorial and Remonstrance Against Religious Assessments” and consider that our first six Presidents were not Christians, but Deists or Unitarians, and you may change you mind that this… Read more »

I chose not to trust in “God”, I do trust in the constitution.

We defend the second amendment to the point of death, ” You can have my gun when you pry it from my cold dead fingers”.

The separation of church and state should be defended the same way.

I don’t have a problem trusting God, it’s some of his followers I don’t trust.

The first references to God came during the Civil War. The founders of this country would be appalled. They tried to give us a country where individuals could honor their own conscience without government control or direction. That includes pantheists and atheists as well as monotheists. What has changed in… Read more »

This is the United States of America, We should not strive to all be the same. No group should lay claim to government institutions. The fact that anyone should try and claim it for their god is wrong. It is “for the people by the people” last time I checked… Read more »

I hope the Bible is correct. I just don’t want out find for sure to soon.

Nice to know that common sense prevailed in this decision.

“In God we trust” simply means “In good and love we trust”. How can this be anything other than a statement of harmony among all people? No harm comes from stating the value of universal kindness that most of us share, religious or otherwise. Thank you.

If “In God we trust” means “In good and love we trust” then why doesn’t the council put that on a sign above chambers? The fact that they haven’t is probably because God is NOT the same thing as good and love.

I think there is quite a bit (or maybe a ton) of arrogance that exists in non believers. I think they don’t believe because they believe THEY are the higher power, after all how can anybody be mightier than them? Good for the city of Bishop!!!! Dogs are proof that… Read more »

That’s right! Clearly there is a monotheistic, Christian, English speaking God in heaven, because dog is God spelled backwards! Anyone who questions that is ignorant and arrogant and hates puppies.

Personally, I believe in the Flying Spaghetti Monster. It would be more meaningful to me to see, “In FSM We Trust”

To be honest, it won’t effect my life one way or another if the words In God we trust’ are displayed in the council chambers or not. How about the City Council focus their time on worthwhile endeavors…..like addressing the skyrocketing rents in our town? Hmmm, let me guess, I… Read more »

Amen!! (No pun intended)- the current Economic Development Element for the City is open for public comment right now and curiously enough the city’s own statistics show that 60% of the housing stock in the City are rentals; while also the city municipal code exempts owners of rentals being required… Read more »