By News Staff on October 17, 2013 in Government Agencies/Utilities 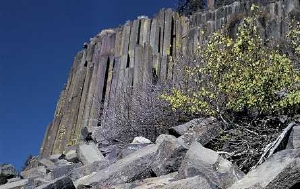 In the Eastern Sierra, operations in the U.S. Forest Service, BLM, Yosemite, Death Valley National Park and Manzanar Historic Site were set to re-open.  Early fall tourism in Inyo and Mono was interrupted by the shutdown which closed campgrounds, ability to get hiking permits and parks generally.  Devils Postpile National Monument submitted the following press release:

As autumn temperatures are moderate in the daytime, but well below freezing at night, all water systems are shutdown, so bring water. The vault toilet is open at the monument. Bring food, sunscreen, and other necessities as no services are open in the valley. On adjacent Inyo National Forest lands, the restroom facilities are closed at Rainbow Falls Trailhead. The vault toilets at Agnew meadows Pacific Crest and Shadow Lakes Trailhead, and Sotcher Lake will open as staff returns to work and is able to reopen. There is no overnight parking within the valley effective October 15 as the monument and valley road access may close due to weather anytime between now and the annual seasonal road closure on October 31.

What’s truly sad about this….ALL Federal Employees who were furloughed (not working) for the past 17 days are ACTUALLY GETTING PAID!!! So they were released from work, did NOTHING for those days, and as a reward- THEY GET PAID their FULL Salaries!!!!!!! When State employees were furloughed for 90 days… Read more »

Folks should be up in arms about Congress recessing at this time, and that State employees where illegally locked out. Unless you hire me on a day to day basis, you need to pay me for my time. Not my fault if my boss is an idiot. Not like any… Read more »

Sierra Local- you should vote the fools out that created this bull. Oh wait, California already did. Never mind.