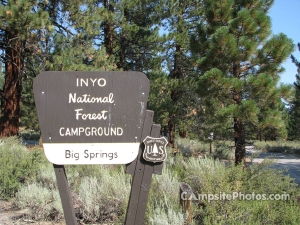 Since timber sales in the 80s, the number of old Jeffrey Pine trees in Mono County diminished substantially. Many consider the pines that are left national treasures. So when the Forest Service cut down a third Jeffrey Pine in Big Springs Campground near Mammoth, local resident Evan Smith objected.

Smith has long championed the pines and managed to save some over the years. In fact in the 80s, Smith organized the Friends of Big Springs to try to stop timber sales in the area. He said 4% of the big old trees remain.

Deb Schweizer, Public Information Officer for the Forest Service said crews did cut down one pine tree this year and two last year. She described the tree recently cut down at Big Springs as a “hazard tree.” Schweizer said the definition of a hazard tree means signs of rot, a snag top, bug kill and a tree generally starting to fail with a target like people, vehicles and campsites below. For the tree in question, she said the “top two-thirds was dead.”

Mr. Smith, who saw the tree cut down and lying in the campground, said the tree needles were green clear to the top. He thinks the designation of “hazard” tree is a guise for taking down trees and selling them for firewood. “Why not move the picnic table instead of cutting a tree down,” said Smith.

Schweizer said, “For us, Big Springs Campground is a designated recreation area – a campground.” She said it is not a Wilderness area. Schweizer said the Jeffrey Pines are tall and with the top two-thirds dead, there could be a potentially serious fall that would hit people, tables and cars.

She said, “We don’t take this lightly. We consider Jeffrey Pines special, and we do protect Old Growth. In recreation areas,” she said, “we protect people.” She said the Forest Service is more lenient with failing trees that are not in developed recreation areas.

Mr. Smith and other members of the public see it differently. Smith said in a letter to the editor, “It appears as though another three hundred year old tree was too close to a picnic table, was deemed a hazard, and was killed by the US Forest Service.” He said there were a lot of animals that needed that tree. Smith pointed to the historic significance of the Jeffrey Pines. He said in 1910, the Indiana Touring Company brought passengers, including President Teddy Roosevelt, through the forest. That’s when Roosevelt planted a tree in Big Pine and visited Big Springs and other forest places.

While the Forest Service claims the pines that were cut down were diseased, Smith said they were all principally healthy trees that survived many events but not chainsaws. “The Forest Service should leave a few examples of these 300-year-old trees, and a campground is a good place for them.” Smith said Wilderness designation will eventually come to the Big Springs area. He said the Forest management plan counts on planting trees to replace ones cut down. Smith called that “very weak science. The healthiest thing,” he said, “is to leave them alone.”

More wild land firefighters are killed or injured by falling trees then fire or other accidents each fire season.

More wild land firefighters are killed or injured by falling trees then fire or other accidents each fire season. Hazard trees are just that. When they do come down, they don’t give warning and kill or injure silently. Most will never see the aftermath of these tree incidents but they… Read more »

My friend and I like to go out and look for trees that are about to fall over. Then we give them a little push with just our hands and watch them fall.

It’s surprising how many are teetering and could fall at any time.

“He said 4% of the big old trees remain.” According to what, his faulty memory? Is there any evidence backing this statistic? Again, “Mr. Smith, who saw the tree cut down and lying in the campground, said the tree needles were green clear to the top.” Sorry Mr. Smith, pics… Read more »

Who’s stalking who? Your motorcross story pops up yet again – you should be thanking that guy for giving you inspiration (one year later) to keep talking about it. You are both on the same wavelength and need to do lunch, perhaps out at the track?

Ken….Don’t be giving these entrepreneurs up in Mammoth any ideas…or we’ll be seeing a condo sign and site on top of Deadman Summit and a proposed MX track across highway 395….remember what that one guy was saying when he was stalking and following around that family up in TOML…..millions of… Read more »

I’m offended by the name Dead Man Summit. I think they should change the name.

I say cut down all the trees — make more room for tourists. That’s where the money is. Trees don’t have any money and they don’t buy tee-shirts. Put a sign up where each tree stood. We love signs….

A little flim flammery going on here 4% is not the case……The area between Deadman Summit and TOML is one of the world largest stands of these trees.I know, Im in that forest every day. They are every where. ‘Old growth’…trees eventually die, be it from age,fire, bugs and lightning,… Read more »