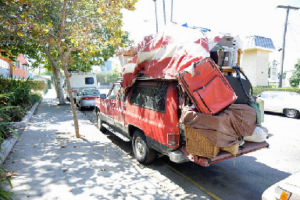 IMACA and the Consortium of Care have been working on a safe place for the homeless to park their cars overnight at a location with access to restroom facilities. What sounds like a no-brainer hasn’t been. Working through issues from the community has been an on-going process and the topic at a virtual meeting last week.

Larry Emerson, IMACA’s housing and planning director, defined the need. According to the homeless count conducted in January, there are 121 homeless in Bishop, including 14 children, 16 veterans and 11 victims of domestic violence. Half of them live out of their vehicles.

Here’s some of the background: the Nazarene Church on West Line Street offered its parking lot as a potential site. Early this year, the Planning Commission approved a Conditional Use Permit for the project. The conditions included a security plan.

When COVID-19 hit, the Consortium jumped through the necessary hoops to get approval for a temporary overnight parking spot at the old Kmart lot but now wants to transition to a permanent site at the church.

The problem for some Bishop residents: the Church is adjacent to the Bishop Union High School Urban Farm. Like any working farm, the students tend to their animals at all hours of the day and often into the night.

According to Susi Baines, Consortium chair, the written responses were two to one in favor, but more of those against responded during the meeting including a cryptic comment from a former FAA farm student, “you can’t trust people like this.”

The program will still have to the Inyo Board of Supervisors and issues raised at the community meeting addressed in the security plan.

Here’s a run-down of some of the pros and cons raised and observations made:

I don’t think I will be donating to iMaca anymore if this is what they do with donation money.

Misunderstood Pittance, Huh, IMACA donates necessities to people in need? Who’d have known? Good Kid Dance, You’re good people if donating to the community to begin with. They’re good people, they’ll understand if you choose to help someone else. Just strikes me as funny since housing isn’t a new focus… Read more »

And many of the homeless are children. We should be ashamed.

Thank you…I agree. I’m highly educated white female living in her car. If I had a choice, I wouldn’t wish homelessness on anyone. Try living homeless for 7 days and see how it is living in your vehicle. Thank you.

It really saddens, even disgusts me, that the FAA farm student said, “we can’t trust people like this.” Trust people like WHAT?!?!? These homeless people could be your classmate, your FAA farm-mate, your former neighbor that’s fallen on hard times. You, none of us, know why anyone has become homeless.… Read more »