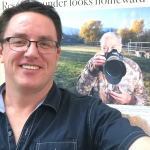 Agee, who worked for the Foundation for a brief period back in 1999, takes over beginning immediately, managing all the day-to-day activities. Agee has a long history in the Mammoth Lakes Community, the son and grandson of locals Dennis Agee and Bob Bumbaugh respectively, both of whom are closely associated with the Foundation’s founder Dave McCoy.

“Dion has a lot of valuable experience both outside and within Mammoth Lakes,” stated Russell. “Now that I’m ready to transition out of the Foundation after it’s been effectively working for 25 years, we have someone who is the ideal candidate to take us into the next 25 years.” Russell remains at the Foundation working on opportunities for the Foundation land, lending a hand as needed, and specifically managing special projects including the proposed Performing Arts Center.

“I’m excited about the future of the Foundation that has successfully supported the community for 25 years. It’s my dream job,” stated Agee. “There are challenges, but there is also so much opportunity.  I’m excited that we have a great team in place to continue Dave’s commitment to and passion for the community. Shira Dubrovner has been doing a terrific job of bringing culture to the local community. Juliana Olinka moves into the position of Development Director from Marketing Director, Steven Krystek continues as Office Manager/Donor Services as does the South Gateway Student Apartment team of Jeffrey Smith and Jill Keefer.”