By News Staff on October 29, 2014 in Government Agencies/Utilities 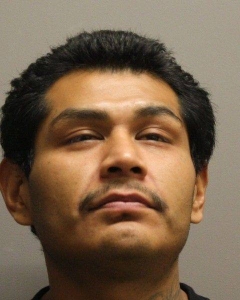 On Wednesday, the Inyo Sheriff’s Department put out the word and a photo available on our website of a man wanted for felony battery and violation of parole.

The Sheriff’s Department says Richard Farrell Andreas, Jr. is 32 years old, a Native American, 5 feet 11 inches tall, 210 pounds, black hair, and brown eyes. According to the Sheriff’s Office, Andreas has tattoos around his head and neck and his last known address was 1050 South Main Street in Lone Pine.

The Sheriff’s Department’s news release says that Andreas is considered armed and dangerous. Officers ask that if you have seen him, please contact law enforcement directly or go through the Inyo County Sheriff’s Department “Report a Crime “webpage. You can remain anonymous.

Call the Inyo County Sheriff’s Department at 760-878-0383, or report by Internet which is http://www.inyocounty.us/so/report-crime/

So what happened to him running around naked and having a gun.. Why did inyo county let him out of jail after being arrested last week for that stunt? And no one can blame anyone else for their actions. Maybe lay off the drugs and alcohol, sober up and get… Read more »

Even NAKED parolee’s can’t have guns….

you can’t get arrested for having a concealed weapon when your naked, just sayin’.

I realize a comment of mine didn’t make it past moderation, I get it, and have nothing more to say, but before I sign off, I must add; If the Inyo County Sheriffs really want any help from “valid” sources, then they need to reason with the community on how… Read more »

They can’t hear you because they are using cognitive dissonance as a psychological coping mechanism.

For them it is to late for you my friend the gates are still open for you to fly freely. Rome is not the best place to be right now.

My nephew is not ARMED & DANGEROUS, as for the rest of his compound, according to LP resident’s remark on Oct 30, that we’re no different, yes we are. A comment like that goes to show how rotten people are, you don’t
know my family-don’t stub your toe?

There’s good and bad in every one Lone Pine, and we all have the same basic needs, like it or not.

Trouble,
Drugs are not a basic need.

Did I say one word about drugs? And Lone Pine Resident, I think it was rotten of you to say such degrading things about a whole family you clearly know crap about!

Let’s move on to something else. BK

This is so ridiculous! Ricky is not a threat or a danger to the community of LP. He is a good hearted young man who has got nothing but the smelly side of the stick. You 2 Lone Liners up there who don’t want to put your name, GOD is… Read more »

I wish I knew where he was to tell him. I would love to help with this, and I wish I could tell him also that his family loves him, his Auntie Earleen. Grandma, Sonny and me and the kids. Cousin Tera and Bubba.

I’m not sure the Pope could get off parole or probation in this county.

Trouble….And the reason for that being ….they keep re-offending…..and our court system keeps kickin’ them back out after the slap-on-the-wrist they get.

Wayne- you seem to think people will change for the better when you keep lock them up for minor offenses. Why?

Desert- Whatever you want to believe about my mind set is fine, but I was refering to how many people go back to jail for minor offenses after already serving their time. Thanks for jumping in.

I know of a couple people of this family that are good,hard working people that overcame things in their lives and have become productive citizens.Part of the blame for this here is our court system and local Law Enforcement not doing nothing about it. When is it time to do… Read more »

He may have a lot of family in the valley, however, his family in Lone Pine are no different then he is other than the fact they have not been arrested multiple times. This guy needs to go to jail along with the rest of their compound in Lone Pine.

You can’t cover your eyes and ears all your life, the problem doesn’t go away in this system, only reinforces it! I mean tax payers will pay either way, I rather see my contribution go towards something more productive…It’s not looking good for the youth of the future :-(… ..and… Read more »

This is the first time I’ve seen someone make the Inyo Sheriffs most wanted list. He has a lot of family in the valley, some of which are very nice people.

He won’t be hard to find…his picture being on the visor of every L.E. vehicle in the valley.
Parolee at large with a gun…bad combo.