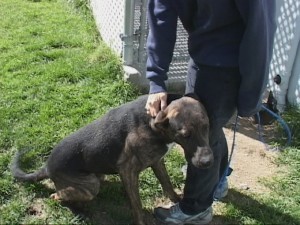 For the local organization known as Inyo and Mono County Animal Resources and Education, or ICARE, it was a good year.  Organizers, which include Ted and Lisa Schade of Bishop, compared statistics in 2011 with numbers when the program started in 1996.

Pet adoptions have gone up 267% over the past 15 years.  82 animals were adopted in 1996 compared to 301 adopted in 2011.  Officials expressed gratitude to Animal Shelter Manager Julie Laughon and her part-time assistant, Katie Bird, for their “tireless efforts on behalf of our homeless pets.”

ICARE is a non-profit organization that has no paid employees, no government funds or office space.  All programs happen because of donations. Check out their website at www.ICAREforPets.org.

thanks for posting the link icare rocks! As a volunteer I love organizations like this. We rescue the seniors that no one wants to give a good home and treat like royalty until it is their time. How do you donate to the stich fund via paypal?

This is a wonderful organization. I’ve donated cash and supplies. I wish I could do more for them more often.

“We can judge the heart of a man by his treatment of animals.”