The Fourth of July holiday will draw visitors to the Eastern Sierra next week. Some say fewer visitors than usual. Those who do show up will meet highway projects. 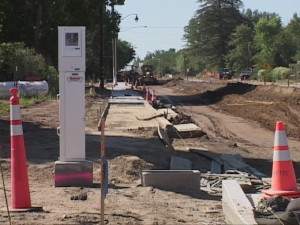 In the town of Independence, the same dirt pit extends the length of the town on the east side of Highway 395. Granite Construction was supposed to pave the two lanes in May. Now, paving may take place next week or after the Fourth of July.

According to Caltrans spokesmen, the asphault Granite wanted to use did not meet specifications. A month later, they will apparently try again. The lack of asphault will make the Independence Fourth of July parade and art show a little on the dusty side.

As for holiday travel, the Auto Club predicts that anxiety over the slumping economy will keep more Americans closer to home. That could mean more visits to the Eastern Sierra, viewed as a short trip for thousands of Los Angelenos.

More people are expected to fly to a holiday destination due to lower airfares. Road travel, however, remains the favorite mode of transportation and is expected to drop somewhat even though gas prices are roughly $1.30 per gallon cheaper this year.

The Auto Club did say that general anxiety over the economy and unemployment will likely dampen holiday travel.

We work to provide daily news to all of the Eastern Sierra, in the tradition of Eastern Sierra News Service and the Sierra Wave. We bring you daily happenings, local politics, crime, government dealings and fun stuff. Please contact us.
View all posts by News Staff →
Bureaucrat Beat: Scandals, Inyo Unfairness, and Drama
Bishop Murder Still a Mystery