By News Staff on November 21, 2013 in Government Agencies/Utilities

The Mammoth High School Girls Volleyball team’s spectacular 2013 season came an end on Tuesday night in the CIF Southern Section Division 5AA semi-finals. The Huskies lost to a very scrappy and motivated Pomona Catholic Pacers team 25-16, 25-21 and 25-8 at Damian High School in La Verne. “I think all the traveling, missed school days, and crazy schedules finally caught up to us” said Head Coach John Morris. “It’s too bad that we could not have ended the season with a better match, but, it takes nothing away from our accomplishments this year”. 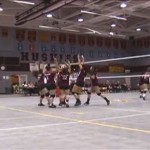 The Huskies finish the season at 20-7, 12-2 in the Desert Mountain League where they shared co-champion honors with Desert and Desert Christian. They placed 4th in their home Mammoth Invitational Tournament and 3rd in the Cal City Tournament earlier this season, beat the Mammoth alumni for the first time in memory, and reached the CIF semi-finals for the first time in 19 years. “I have so much praise for this team”, said Coach Morris, “and want to congratulate Seniors Kyra McKee, Hailey Sanders, Sabrina Clevenger, Emma Peckenpaugh, Kelly Berger and my daughter Cassidy for playing so well and accomplishing so much in their final season at MHS. They are a great group of young ladies and I have huge respect for all of them”.

Well done! You were a joy to watch.