The historic site in Death Valley National Park is still closed undergoing renovation from the devastating flood in 2015 and more recently the devastating fire at Scotty’s Castle reported on Sierra Wave earlier this year. In this press release, the National Park service is letting the public, historians, and researchers know of a new photographic resource that is now available.

DEATH VALLEY, CA – The National Park Service has posted 568 historic Scotty’s Castle photos online. The website, NPGallery.nps.gov/deva, includes snapshots that chronicle the desert escapades of Walter “Death Valley Scotty” Scott, Albert Johnson, Bessie Johnson, their friends, and their families. The collection includes series of photographs taken from the same location over time that chronicles the nine years of construction in the 1920s.

The project was the brainchild of NPS Scotty’s Castle curator Gretchen Voeks, who said, “Digitizing accomplishes two goals; because we now have electronic copies to use for research, the original photographs are less susceptible to damage from use and wear, and the online publication makes it possible for many more people to access the materials.” The project was co-managed by Emily Field, of Great Basin Institute. 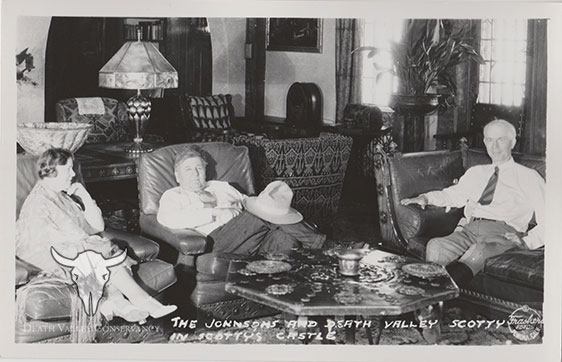 568 digitized historic photos are now readily available to the public, historians, and researchers.

Volunteers contributed over 3,000 hours in a “labor of love” to share these photos with the world. Dwight Pennebaker, Christine Ford, Terry Eddington, Pam Krajnick, and Leigh McLendon scanned delicate historic photos, researched to verify copyrights, described the photos, and uploaded them to the site.

Scotty’s Castle is temporarily closed to the public due to damage from a flash flood in 2015. Further tragedy struck on April 22, when the partially-repaired visitor center burned to the ground. Repairs will resume shortly, and the NPS plans to reopen Scotty’s Castle in 2023.