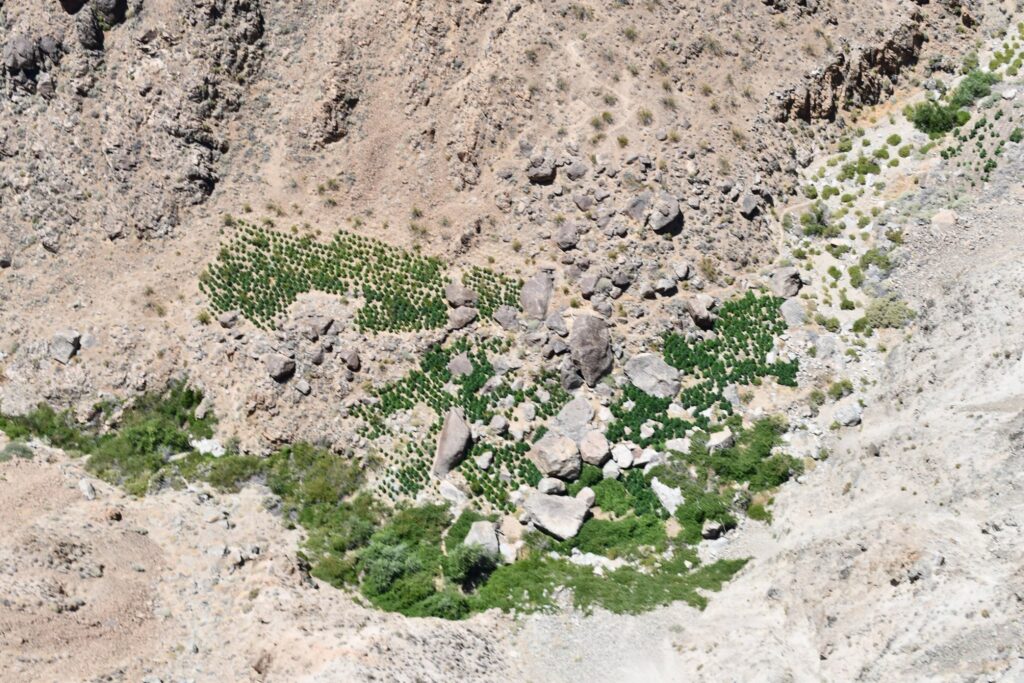 All agencies assisting in the eradication operation want to remind residents and visitors of the dangers that are inherent on illegal marijuana cultivation. If you become aware that you have come upon a cultivation site, leave immediately and do not attempt to engage with the growers. Once in a safe location, report as many details about the location to the Inyo County Sheriff’s Office at 760-878-0383, option 4.

Marijuana cultivation causes extreme damage to ecosystems. As part of the illegal cultivation process, growers are responsible for using miles of plastic tubing and diverting water from natural sources for crop irrigation. The use of banned herbicides and pesticides is also common practice. Additionally, marijuana cultivation sites often contain large amounts of trash and create fire hazards in wildland areas. Reclamation will be conducted through BLM and US Forest Service.

Law enforcement officers continue to investigate the grow site. No arrests have been made at this time.

No no no, I don't smoke it no more

There is no rhyme, reason or logic to grow illegal on our public or private lands. As having had more than my share in a lifetime past, personal choice/liberty is not the issue. We all can grow our own, absent paranoia, arrest, prosecution and criminal record. There is a legal… Read more »

Pine
Reply to  No no no, I don't smoke it no more

Yes, you are correct in that we are able to grow our own, unless you live in town where there are schools, where it is still illegal. This is a for-profit grow, which, even if it is done legally, costs thousands of dollars to become permitted. This has made commercial… Read more »

No no no, I don't smoke it no more
Reply to  Pine

It is my understanding that anyone over the age of 21 is allowed to grow 6 plants . I do not see the restriction regarding schools. I also believe that children should not be exposed to marijuana. Here’s a download: “Health and Safety Code 11358 HS is the California statute… Read more »

Not that we’ve been made aware of at this time.

What was that huge police presence on 395 south of little lake? 50+ police cars, helicopter, Inyo, Kern, CHP, unmarked, etc. All staged waiting and watching something

Sierra Wave has only received bits and pieces of this story. A man reportedly has a rifle and for some reason reportedly pointed it at an officer/s. There is some indication, not confirmed, that the man may be from Ridgecrest. It’s happening down near Pearsonville and there’s a significant LE… Read more »