Howard E. Frost, former Bishop Postmaster, passed away at his home in Bakersfield on June 1, 2010, the day after Memorial Day. He was 86. 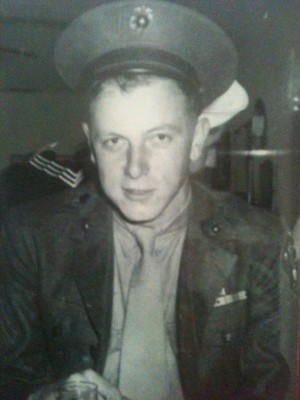 Howard Frost in the Marine Corps in the 1940s

Howard Frost was born on Jan. 16, 1924, in Santa Monica. In 1942, he joined the United States Marine Corps and proudly served his country until 1946. Mr. Frost was awarded the Presidential Unit Citation and the Purple Heart Award for his meritorious military service.

In 1994, he received the Distinguished Service Award from the 2nd Marine Division, distinguishing himself as an outstanding combat Marine in the campaigns at Tarawa, Saipan, Tinian and Okinawa. The award also recognized his challenge of editing “Follow Me”, a Marine newsletter from 1989 to 1994.

Mr. Frost moved to Bishop in 1944, beginning his career with the United States Post Ofiice as a mailhandler and working his way up to Postmaster, a position he held for five years until his retirement in 1985.

In 1985, Howard and his wife, Billie, relocated from Bishop to Victorville and in 2000 moved to Bakersfield to be close to family.

Mr. Frost was an avid sports fan, announcing and reporting on a multitude of sporting events in and around the Bishop area. He took special interest in local young athletes and enjoyed witnessing them develop their talent.

He was a contributor to the Inyo Register for more than 40 years, writing editorials and sports articles. In1986, Mr. Frost was named to the CIF-Southern Section Hall of Fame, becoming just the second media member to be inducted.

While sports played a major role in his life and Mr. Forst enjoyed many friendships with people in the Bishop area, the true joy in his life came from his immediate family. Nothing meant more to him than watching his grandchildren grow, participate extra-curricular activities, supporting their personal goals and celebrating their achievements; those were the highlights of his life.

Howard Frost will long be remembered for his sense of humor and his meticulous memory. The family would like to extend its heartfelt appreciation to the staff of Hoffman Hospice, Dr. Emanuel Stategos, and the many helping hands of those involved with his end-of-life care.

Services for Howard Frost will be held at Brune Mortuary on Tuesday, June 8 at 11 a.m.; graveside services at the East Line Street Cemetery.

We work to provide daily news to all of the Eastern Sierra, in the tradition of Eastern Sierra News Service and the Sierra Wave. We bring you daily happenings, local politics, crime, government dealings and fun stuff. Please contact us.
View all posts by News Staff →
Bridgeport Man Sees Mismanagement in MCSO
MCSO: Policy Concern