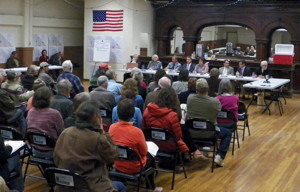 Last week’s Tuesday evening public meeting hosted in Independence by the Inyo County Board of Supervisors demonstrated the keen interest that the public has in renewable energy, an interest shared in a recent Gallop poll which showed Americans overwhelmingly supporting solar energy.

In an alphabet soup of acronyms designating local, state, and federal agencies and programs, it was explained to the fifty-plus interested citizens in attendance that the state of California is requiring that solar, wind and other renewable sources make up 33 percent of the electricity supply by 2020, which is among one of the most ambitious programs ever attempted.

The state’s Desert Renewable Energy Conservation Plan (DRECP) is being developed by the California Energy Commission (CEC). The objective is to put 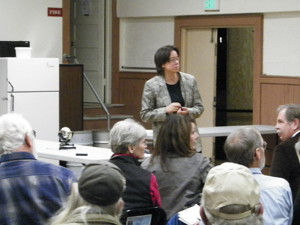 together a plan that will help provide effective protection and conservation of desert ecosystems while allowing for the appropriate development of renewable energy projects that provides greater surety of timelines, potential costs and hurdles facing developers in order to fast-track renewable energy production to combat greenhouse gasses.

Commissioner Karen Douglas with the California Energy Commission thanked the board for its invitation and went on to explain the purpose of the DRECP. “There is a need to be more ‘proactive’ rather than always being ‘reactive’, explained Douglas. As seen with the three recent solar energy projects that have surfaced in the Owens Valley just within the past several years due to the state of California’s ambitious renewable and conservation effort, the CEC decided they could no longer continue to do things on a project-by-project basis, but needed to have a global plan in place to help guarantee that planning agencies, as well as potential developers, had the tools readily available to them to make sound decisions.

The DRECP focus is on the desert regions and adjacent lands of seven California counties – Imperial, Inyo, Kern, Los Angeles, Riverside, San Bernardino, and San Diego, which cover 22.5 million acres of federal and non-federal California desert land. The objective is to promote the creation, transmission, and storage of renewable energy while respecting environmental concerns.

The alphabet soup of agencies coming together under the DRECP are the CEC (California Energy Commission, the CDFWF (California Department of Fish and Game), the BLM (U.S. Bureau of Land Management), and the USFWS, (U.S. Fish and Wildlife Service); together known as REAT (Renewable Energy Action Team), these agencies, along with others that will have to be consulted as well, will work together coordinating on large renewable energy projects in California.

Cautioning the audience that the draft plan will be a very different document from the final plan, Douglas said that they are only at the starting point and the finish line is a ways off and it will be undergoing constant change and revision.

The DRECP website at http://www.drecp.org is the best source for current information for both the public that wants to be kept informed and participate and for the agencies charged with the planning. The information available to the public on the website will be the same as used by the

planning agencies in the process. “The idea is to be as inclusive and transparent as possible,” said Douglas.

Jim Kenna, the Director for the California Bureau of Land Management (BLM), told the audience that this is going to be a very long-term process lasting until 2040. The state has a baseline goal of 20,000 megawatts. He went on to explain the challenges facing California’s energy needs with the closing of the San Onofre Nuclear Generating Plant and the Mojave Power Station. Adding to the problem are the increasingly stringent standards affecting energy production, noting that the issues are “complex with many moving parts.”

Kenna said that an aging infrastructure will, as it fails, force losses of energy production that must be replaced. He went on to say that increased energy demands of modern technology, combined by the needs of transportation− complicated by climate change, concerns with natural gas production such as “fracking”, and up-and-coming technologies, the future presents many challenges which will need to be assessed and reassessed on an ongoing basis and then integrated into the renewable energy program.

As a result of the DRECP initiative, the BLM will be amending all of its Land Use Plans in the state. The U.S. Federal Fish and Wildlife Services Endangered Species Act (ESA) will be a part of the planning process as will the state’s California Natural Community Conservation Plan (NCCP).

Heard repeatedly throughout the meeting and at information tables set around the room was “it is an ambitious goal” and that the “devil will be in the details.”

Many concerns surround the issue of renewable solar energy projects in the Owens Valley such as fears of industrialization, loss of scenic views, added water losses, and continued exploitation by the Los Angeles Department of Water and Power…and now perhaps others. Some residents unequivocally support the renewable energy projects while others question the benefits of new jobs and clean energy production in the valley versus costs to the local environment and scenic views.

The Owens Valley Committee recently submitted comments to the LADWP on its concerns over the proposed Southern Owens Valley Solar Ranch Project. The more recent news of the proposed Northland Power 200-Megawatt plant off Mazourka Canyon Road outside of Independence is creating ever-growing concern over the cumulative effects of an ever-expanding industrial solar power industry blanketing the Owens Valley.

If nothing else, Tuesday’s DRECP meeting showed that renewable energy, especially solar here in the Owens Valley, will be a subject that will continue to generate both considerable interest and concern.

The adage that “nothing in life is free” is well-applied to the many issues that surround energy production whether from legacy or renewable energy sources. Even “green” energy comes at a cost.

I think I’m over opposing the project (I am just another opinion anyway), We need green energy! I don’t see a win at all opposing something that is definitely needed at this stage of the game, Yes I understand I may be scratching the backs of those who do not… Read more »

I agree. We are all going to suffer from climate change and therefore we are all in it together. The amount of industrial energy that can be built in the Owens Valley is limited by the remaining capacity in the transmission lines out of the county. As far as I… Read more »

“Ground Control to Major Tom. Take your protein pill and put your helmet on.” What a great song . Almost takes you into low orbit and a view of the Earth. From that view are there not places on the planet where there could be a project site of last… Read more »

I can hear you Philip. I agree it is a great song. It plays in my head every time I write a post. I do not claim to be an expert on transmission, but your statement sounds true to everything I have heard. Transmission is the key to renewable energy,… Read more »

Major Tom , We cannot afford to lose you, have you wandering off into the siren call of the wonder and beauty of it all. We need your closer inspection to reveal our handprints on the planet. Maybe a haze on the elliptical horizon is a clue. We need people… Read more »

Major Tom, you are mistaken. Solar companies pay higher taxes, land rents and per megawatt costs to site on public lands where they site clean energy projects. I don’t know how geothermal compares, but solar pays higher rates per acre than the rates the oil and gas industry is charged… Read more »

How/where did common sense get into this blog? Shouldn’t you be flaming someone for something?

We leave the flaming, name calling and lack of common sense to your posts. Thanks for asking though.

We all want to protect our planet. Renewable energy fits that bill. We all want to assure the survival of all living things. The living things in the Owens Valley have been under assault for many decades so there are many questions and needed answers before the plants, animals ,view… Read more »

Why put this in the desert at all, why not put it in your back yard CEC Commissioner Karen Douglas? Just kidding, it would be inappropriate to put this in a neighborhood full of multimillion dollar homes. Is it because??? It’s ugly and you don’t value the desert. Because desert… Read more »

Something to think about — http://www.theguardian.com/environment/2013/nov/20/90-companies-man-made-global-warming-emissions-climate-change Oil, coal and gas companies are contributing to most carbon emissions, causing climate change and some are also funding denial campaigns. Photograph: David Gray/Reuters The climate crisis of the 21st century has been caused largely by just 90 companies, which between them produced nearly… Read more »