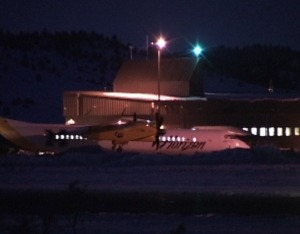 It was Ballas who signed the agreement with the Town in 1997. He transferred the part of the agreement to MLLA that includes development rights for condos and hotels on a 25 acre site at the airport.  Martinez said once MLLA and the Town reach a settlement agreement over the $42 million lawsuit debt, the development rights will “go away.”  Theoretically, the site would  then be available for someone else to develop.

Martinez said still in place are all other components such as a potential retail center, roads and a new terminal.  She said Terry Ballas approached the Town on the rest of the development since time is running out.  Martinez said “discussions on the remainder of the development agreement” are now going on between Ballas and the Town.  The benefit of Ballas developing at the airport, said Martinez, would be tax revenue – sales tax and property tax.

At the direction of the Town Council, Martinez sent a counter offer for settlement of the $42 million debt to MLLA last week.  As of Tuesday, MLLA had not responded.  If they do by Wednesday night, the Town Council would plan to talk about it in closed session.  Martinez said if MLLA does not respond by Wednesday, a special closed session may have to be called later in December.

I still think MMM is a cutie….

“Financial Consultant” Marianna Marysheva-Martinez and Mr. Ballas both need a new play book. We’ve already heard about the tax revenues the town was going to receive from the last bunch of carpet baggers that blew through town. Take a look around, do you see any signs of the towns prosperity from all the hyped development? I see an ever expanding ghetto, for the low wage workers due to cheap and unscrupulous employers. The money leaves this town faster than the tourist or developers.

The town council needs a new end game too, using hired scapegoats and calling them consultants is getting old. We are now on the hook to the tune of 42 million from the last “legal” consultants that the council contracted with. Regardless of the results to these negotiations, it’s time to demand accountability for the towns failures! Doing the same thing and expecting different results is ludicrous!

Talking airport development by the town “consultant” is for the dense. Are we being led to believe that this would be the source of new tax revenue to pay for a settlement debt bond?

“Martinez said “discussions on the remainder of the development agreement” are now going on between Ballas and the Town. The benefit of Ballas developing at the airport, said Martinez, would be tax revenue – sales tax and property tax.”

Groan…. We have empty mall space all over town. The last time I was in the Village, there were over 10 empty store fronts. The most successful retail franchise in town is, “Space Available”.

We already are being sued for one botched development effort at the airport and we are still talking about more — with the same people?

Excuse me — my head is about to explode….

According to the article, the development agreement was made in 1997. The courts have said that the town can not just ignore the agreements they make with these companies. The companies may be greedy money grubbing jerks, but at the same time the town shouldn’t be going around signing contracts they don’t intend to honor. IMHO local government should focus on providing services and stay out of development anyway. This is a prime example of stupid government.