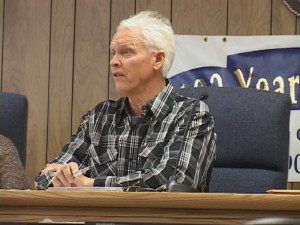 Eastman explained that earlier comments from Court of Appeals judges looked like an unfavorable decision might hit Mammoth. A second change at oral arguments, he said, was another bite at that legal apple.

officials a kind of reprieve and a chance, in their minds, to move ahead with some things.

At last Friday’s meeting of the Eastern Sierra Council of Governments, Mammoth town Councilman John Eastman explained to the other officials that the Court of Appeals has given Mammoth a chance to re-argue its appeal of the Hot Creek lawsuit which was over the development of a condo hotel at Mammoth Airport. A Mono jury awarded Hot Creek a $30 million judgment. The news came out last week that one of the Third District Court of Appeal judges retired and a new justice wants to hear the argument.

“It’s another bite at the legal apple,” said Eastman. He said that the new arguments will take place December 20th. A decision will come out 90 days later. Eastman described the burden of this decision as “the Town of Mammoth Lakes treading water, so to speak, until a decision comes down from the Court of Appeals.”

The new psychological breathing room makes things look somewhat different to the Town Council. Eastman said, “I suspect the Town Council will take some action in some form on things that they haven’t done.”

Later, I asked Eastman what things the Council might do. He said they had held back on hiring a Parks and Recreation Director. “This will give us an additional four months. We’ll be well into the winter and will have a better revenue picture. It gives us more time,” said Eastman.

The Town Council had tried to hire someone for a position that combined finance and human resources. Eastman said that the response was not what they had hoped for so they are working on a new job description and will try again.

We work to provide daily news to all of the Eastern Sierra, in the tradition of Eastern Sierra News Service and the Sierra Wave. We bring you daily happenings, local politics, crime, government dealings and fun stuff. Please contact us.
View all posts by News Staff →
“Retail Coach” executives analyze Bishop for later public meetings
The race is on in the City of Bishop