In what seemed a cruelly random act, nine horses were injured, a truck burned and tack sheds were rifled through early Monday morning at the Big Pine Saddle Club. 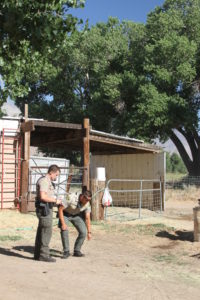 A club member has put up a $1,000 reward for anyone with information leading to the arrest of the criminal.

The club, located across from Mendenhall Park, stables 36 horses owned by area residents.

The Big Pine Volunteer Fire Department and law enforcement had been called to the scene around 1:30 a.m., according to the Sheriff’s Department Facebook page. A pick-up, parked in an empty corral area, was on fire. The truck was a total loss but the fire did not spread to structures or vegetation.

Footprints found at the scene of the fire were traced to the men’s restroom at the park. The Department stated evidence indicated the perpetrator tried to set the restroom structure on fire.

As club members came after dawn to feed, the injuries to horses became apparent. Three were trailered to the veterinarian, the rest were treated on the scene. One of the more seriously injured animals received 40 stitches to close an extensive wound. The gelding was also stabbed. By Monday evening he was back at the club. 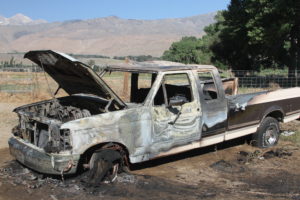 Injuries ranged from shallow slashes across the neck to what appeared to be a hammer blow to the head. The more serious injuries look like an attempt to slit the animals’ throats.

Sheriff’s deputies, an investigator and crime scene technician as well as personnel from the County Animal Shelter scoured the area for evidence. Some tack sheds were broken into with feed and shaving bags ripped open and the shed contents rifled through. A child’s saddle was stolen.

Both Deputy Mark Gutierrez and Animal Control Supervisor Julie Richardson said they had never seen anything like it.

Within the last year, a horse suffered injuries similar to Monday’s attacks. At that time, one of the members suggested it was a knife wound, but nobody wanted to believe it.

According to saddle club president Shelly Snoderly, the club will be setting up a GoFundMe page to help horse owners with veterinary expenses; the Sheriff’s Department has committed to adding patrols to the area.

It would be nice when writing articles to include- just where the heck is Big Pine!?

I think we should all install cameras on our properties. This seems like the actions of a possible PCP user to me… ????

INSTALL CAMERAS EVERYWHERE!!! YOU HAVE A PSYCHO ON THE LOOSE!

Is the Go Fund set up yet

It is well known that the glacier view campground has long term meth heads living there. It across the street from the stables. I stayed there for a month in the winter and saw a lot of shady druggie people coming and going from there, and my travel trailer was… Read more »

They need to install security cameras now… It’s such a bummer that there are people that would do these kinds of random acts of violence. I really hope they catch the person that did this!

justice is nice when you have someone to serve it to. someone pissed someone off and whoever it was they had enough money to pay …… you know it is very hard to think that any human could do something so horrible even if they were paid and even if… Read more »

Take that Gofundme and get many cameras set up, everywhere hid them, on the road in and out all around the property, so this never happens again! This person or persons are sick! Wow so sad.

My thoughts on this matter exactly. Read recently that acts of cruelty to animals are now treated as class 1 felonies by the federal government. We’ll see how justice works on this sicko!

Unbelievably horrible act. Just sickening. Please catch whoever did this.

Transient, mentally ill and meth user. Just a guess due to random and bizarre behavior.

I appreciate gofundme pages. But doesn’t the stable have insurance? I do hope these people are caught and brought to justice. A gofundme may be of good use in that instance too

Should the discovery of footprints have been mentioned publicly (on facebook) prior to completion of the investigation? I know criminals typically lack common sense but that could give him/her/them the idea to dispose of that potential evidence. Maybe I’ve seen too many western movies but I like the idea of… Read more »

There is no excuse for these crimes against these defenseless animals when these individuals are caught they need to be sentenced to the maximum allowable penalties. If there is a chance to collect in a civil court then by all means go for it, make these people pay in the… Read more »

Tinner: I wasn’t going to mention the footprints for the same reason you mentioned. Sure didn’t want the creep to toss his footwear. But, the Inyo Sheriff’s Facebook page included the statement re: tracking the prints to the restrooms at Mendenhall Park, so I included that reference. Update: all the… Read more »

MIght check with any girls that might have reject by the others. These clubs are very clickey.

Rainey, this type of Perpetrator will turn out to be an emotionally deranged individual whose personality aberration includes a childhood history of inflicting pain on defenseless animals, and who in this crime, is acting out upon some sort of confused vengeance motive. Usually this personalty type is barely functional in… Read more »

Gene, or a meth head who has burned all his bridges and thought the horses were out to do harm to him.

Tinner– It could be a combination of BOTH of such types, in one perpetrator. That is because addiction and mental illness frequently coexist, and if someone so afflicted is living in an homeless encampment in an adjacent park, the chance for an interaction with a boarder at the stable arises.… Read more »

I hope everyone heals and recovers from this horrible act. This person(s) whondid this are a great threat to society and I hope they are quickly caught. Unfortunately due to Prop 47/57 and AB 109, if caught the suspect(s) will probably only serve 7-12 months. These law changes that the… Read more »

Are we law-abiding, tax paying citizens paying the toll? I haven’t been sent to jail or put on probation for paying my taxes. Nor have I received any kind of sentencing for following the law. These propositions don’t have any negative impact on the law-abiding citizens. Don’t mix the issues.

We are paying the toll but having to deal with increased property crimes, drug related crimes, aggressive homeless (luckily it is not bad here, yet). With the reduction of sentences, early release etc, it has been proven time and time again that people that should have still been in jail/prison… Read more »

Inyo , our prisons our over filled with non violent paroles, who get caught bye a pee test for drinking in a bar , or smoking a joint like all of have done legally or illegally. And the cops know that, but don’t care. They just get off on arresting… Read more »

Really, what are you talking about?

If you have absoluteloy no idea what you’re babbling about, why continue to babble? These crimes are serious felonies and will not be reduced to misdemeanor status.

Womp Womp….I agree with you…this one not going to be reduced to a misdemeanor or some slap-on-the-wrist plea deal like so many cases do here….but when they’re caught and arrested,we will have some,and probably posting on the Sierra Wave site,how Law Enforcement is “picking on ” those that are charged,and… Read more »

So when you’re completely wrong, are you going to retract your words and admit it? Nah, probably not. You’ll just pretend you never said any of this inane nonsense. Watch and see.

I hope you catch the SOBs and they have to pay dearly.