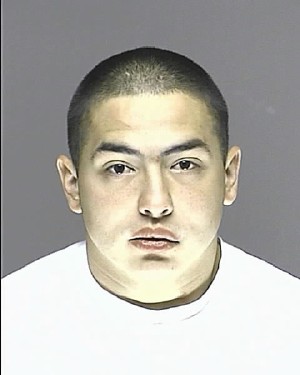 A 23 year old Bishop man died Saturday night, reportedly from stab wounds. The Sheriffs Department has called it a homicide. Investigators continued to serve search warrants and question witnesses to determine what happened Saturday night. Inyo County Under Sheriff Jim Jones did say that at 10pm Saturday, Inyo Sheriff Deputies responded to a call from the Bishop Indian Reservation of a possible stabbing.

Officers found the victim in a home on the reservation and immediately called an ambulance. The young man was rushed to Northern Inyo Hospital where he was pronounced dead. The victim was identified as James Eric Rambeau, 23 of Bishop.

Officers said that information from the scene was developed and the suspect was located in another Bishop home. Upon location, the suspect was found to have sustained minor injuries. He was taken to Northern Inyo Hospital, treated and taken into custody. The suspect, Louis Daniel LePlat, 18, was booked at the Inyo County Jail for murder. Bail has been set at one million dollars.

An autopsy on the victim was scheduled for Tuesday in Orange County. More information was expected to be made available after that procedure.

We work to provide daily news to all of the Eastern Sierra, in the tradition of Eastern Sierra News Service and the Sierra Wave. We bring you daily happenings, local politics, crime, government dealings and fun stuff. Please contact us.
View all posts by News Staff →
Local Warning of Cookie Dough Recall
Village Players Meet Over Potential Agreement