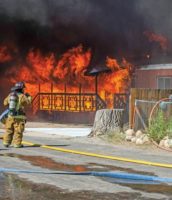 First, homeowners in the Fairview area of West Bishop had to endure a fire that destroyed their homes. Then, some were told the land those homes sat on never legally belonged to them.

This story seems to have a much better ending.

The premise: the sale of tribal lands by Esther Watterson roughly 70 years ago wasn’t legal as there was no apparent proof any sale was approved by the federal government, a requirement put on tribal lands.

But, according to Tyler Core of Inyo-Mono Title Company, the government did approve the sale and Inyo-Mono Title has the paperwork to prove it. One common premise is that “private citizens and businesses are better at their job than local or federal government”. That was Core’s explanation of the misinformation.

The title insurance wouldn’t have messed this up because that’s what they do for a living.

So the Assessor initiated and the CAO, County Counsel, and Risk Manager all approved a FALSE claim? Maybe the Board of Supervisors should rescind their authority to do so. And take it out of their salary.

Ask a Parent
Reply to  JQP

See the Inyo Register, Public notices, apparently the Supervisors are looking at an ordinance addressing “claim settlement authority” to modify the delegation authority of the risk manager…To be heard at Supervisor’s meeting on Sept 6, 2022. Those who are concerned about the fact that some Inyo County employees were able… Read more »

JQP
Reply to  Ask a Parent

Ah, yes. The item on Tuesday’s agenda is to RAISE the authority limits of the very person who signed off on the false claim. Now he can give away more money for no good reason 🙄

1)was the sale of land legal and binding?
2)Did the County unlawfully collect property tax fees on federally exempt trust land either prior to, and or, following the sale?
3)Did the Inyo County employees who entered into agreement to settle the claim, have the authority to do so?

How does the old song go ?…”Something for nothing,la,la,la “… Don’t remember the recent post,but I was mentioning how these lawyers get into frivolous things trying to make a quick buck… And I remember one or two people taking offense to what I was saying. Maybe this here,a good example… Read more »

Talk about kicking somebody when they’re down.

Does Inyo-Mono Title stand to be involved in a title insurance claim?

Not commenting on integrity of Inyo-Mono Title, but on the standard of Sierrawave journalism here.

Well this seems massively oversimplified…is it case closed? Has the tribal office conceded claims to the title? Aren’t those public documents, and can’t they be shared?

Tribal Office didn’t make any official claims, not sure they are even involved. This is a specific set of tribal members represented by Indian Legal Services. Indian Legal Services intended(s) to send a letter to the folks whose homes burned down, threatening them by claiming they do not own that… Read more »

My question is………..where has all of the tax money gone that had been illegally collected all these years gone? Clearly not to taxes if taxes were never due? I would imagine their numbers wouldn’t add up at some point???? And who was refunded and how? Shame on you Inyo County!… Read more »

The more interesting question here is, “Who told them that the land under their house didn’t belong to them?”
Instead of praising InyoMono for doing their job, shed some light on the people or corporation who tried to exploit our residents after a tragic accident.

Ask a Parent
Reply to  Pine

Pine
Reply to  Ask a Parent

Dear Deb, maybe you can look into the rumor that the Inyo County Tax Collector already refunded thousands in back taxes to someone based on this same false premise! Allegedly in this same neighborhood! Inyo County has several lawyers working for them, how is it they could do something like… Read more »

Why lawyers are disliked
Reply to  Ask a Parent

This week’s Sheet has an informative article with lots of the missing details. See page 2. It’s just so crazy that so much went down before anyone checked with the title office!

Ask a Parent
Reply to  Why lawyers are disliked

The Sheet’s owner is intimately involved in the situation, maybe he has a spin.

Ask a Parent
Reply to  Why lawyers are disliked

I spoke too soon, The Sheet really does have an excellent article. Now who else wants to go after the County for their unfair property taxes!

Thank you!!! And yes private businesses gets stuff done!! Get out of the way, government…