By News Staff on April 3, 2013 in Government Agencies/Utilities 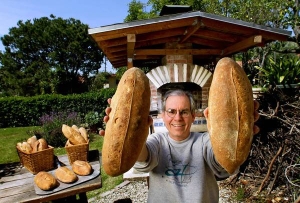 Legalized at last – those who want to make food in their home kitchens and sell it. That’s what the new Cottage Food Act did for Californians this year, but now some interested in home food sales face the possibility of being taxed like a business.

Inyo Assessor Tom Lanshaw said, “My job is to discover all business personal property that is taxable.” That news raised the question of the Southern Inyo Hospital parcel tax – at least $500 per year plus Inyo County Business Property Tax. Suddenly, the prospect of home food sales did not look so good to some.

Mark Stambler, cottage food activist said of the possible taxation, “I think that goes against the interest of the Cottage Food Act. It was envisioned as a way to lower the barriers to the food industry.” Stambler said the idea was to “keep all permit fees and assessments at the lowest possible level so anyone could use the act to enhance their economic standing.”

In hard times, legislators reasoned that the Food Act would give a lot of people a way to supplement their income. Stambler said, “We never thought this would cost more than $100 to get involved.” Stambler, who is a well-known home-bread baker in Los Angeles, said the whole idea was for people to get started on a small scale and then once successful, start a commercial business.

Inyo County Assessor Lanshaw said he has until January 1 of 2014 to figure out what to do about taxes. He said he has not heard anything about ignoring the Cottage Food enterprises. Said Lanshaw, “If you’re in business, you’re in business.” Declaring the Home Food people official businesses will also put them on the tax roll, and that’s why Southern Inyo people might face the hospital tax. Lanshaw said his office does assess other home businesses like cosmetic sales.

Lanshaw did say it’s up to Southern Inyo Hospital what they do about taxing the Cottage Food Industry. Some citizens, interested in home food sales, went to the Hospital Board and asked not to be taxed. Citizens say there were 100 people at Cottage Food Act workshops and many who want to get going but taxes may prohibit them.

You need to understand that this parcel tax is a voter approved Measure, approved by over a 2/3 majority of the District’s votes as required. The Measure was simply written and in the voter pamphlet. It clearly stated a $500.00 parcel tax on every parcel where a commercial business is… Read more »

“You need to understand”??? How condescending.

The Content of the state mandated Cottage Food Act is also clear, and it runs contrary to what you state is the intent of the hospital tax.

It is the fact that it is contrary that is the underlying source of the issue. The Act does not cancel or modify all other previously approved taxes. Which goes back to determining what is the legal process to make any changes if that is what the residents of the… Read more »

congratulations,don.keep your fingers crossed and your health insurance paid

Southern Inyo County desperately needs economic development. It seems to me that both the Assessor and the Southern Inyo Hospital Board should do everything within their power to support microenterprise initiatives, as they could lead to actual businesses that would pay business taxes and business parcel taxes, once they become… Read more »

To Ferdinand,
I have gone to many Senior and Historical Society pot luck lunches and dinners over the years and have never been disappointed… These pot lucks were cooked by friends within their homes and so far it as always been a wonderful dinning experience… Don…

When the voters passed the So. Inyo Hospital tax, the law didn’t say that they would tax home based business at the same rate as standing/Main Street business. We all have to pay this fee/tax on our parcels and every home on the property. For most this is $150. Had… Read more »

Trouble
Reply to  Just be fair

Wow, I missed the part about the extra $500 bucks.Sorry. Maybe the hospital should or could agree to a small percentage instead. At least for the first few years????

After thinking about this , I think every one should have to pay taxes. Is it really fair to the mom and pop stores to have to compete with people that don’t? Besides there are good tax right offs for new businesses.

It’s unfortunate that no is mentioning that Cottage Food producers in California have an income limit on what they are allowed to earn. Are there any other small businesses that have an income cap? I sure haven’t heard of any. So even if they are taxed, it certainly should not… Read more »

The income cap is to make sure that Big Brother gets their cut!

i wouldnt buy or eat anything made in someones house,garage,backyard,whatever, do they have cats and dogs?roaches,do they have a clean environment to produce these products?thanks,but no thanks

FYI from Sustainable Economics Law Center: It depends on whether you will conduct direct or indirect sales for the most part. Cottage food operations with a Class A permit that conduct direct sales only (see “Do I have to get a permit from the health department?” for more info) will… Read more »

Yeah I hear ya … sometimes you wonder .. about the environment that people are working in .. when they produce stuff out of their house, but then it is like anything else .. even restaurants, some are good, some are bad with regard to cleanliness. But, they … the… Read more »

…and not one word of concern about the food produced in “homes”. I’ve visited some homes that I would not even want to sit down in let alone eat in. Yet anyone can produce food and sell it out of the trunk of his car. I don’t know… I don’t… Read more »

I can see this as a boon to the illegals. I would never by anthing from a street vendor of this type.

I am a little confused here. I had great a great tax return when I started my own company. I was also working a full time job at the time.

You need to hire a new accountant then. The wonders of accounting never fail to amaze me Tax law strongly favor those who own businesses..

Interesting, a parcel tax implies a tax related to real estate. How can a business be considered a parcel? If he is referring to the home they live in and use for the business, that would appear to be double taxation…if they’re already paying the $500 parcel tax, why would… Read more »

I’ve always worked hard, paid my bills, given to charitable causes and beggars on the street, put money away for a rainy day … and have no problem whatsoever paying my taxes. Apparently, there are those who thought they could get by on social security, realize they cannot, and are… Read more »

Yeah Dr. I hear ya .. but that is only a fraction of the baby boomers, I am at the tale end of the boomer span. I am not angry at the world or people like you, yes apparently there are those who are, and for some .. yes they… Read more »

I’ve always paid my taxes as well, I might be annoyed at some of it, i understand you have to have taxes to pay for stuff that the government provides. I get that, but as I said I get annoyed by how .. such as in this case. They allow… Read more »

How the right impresses
Reply to  Big AL

Angry, taxes are for someone else to pay. You know, the “other guy”. Keep that straight and everything will be fine around here.

shut up and pay your taxes like GOOD SHEEPLE…

This is for my buddy upthecreek

Lifestyles of the Rich and Famous on a Government Pension

I admit to being an angry boomer, I’ll explain why I’m angry too. You see it was always my dream to retire in Mammoth and things were moving along just fine until the MLLA lawsuit began to fester and the stop the bleeding measures to the tune of 50 million… Read more »

Right on .. I totally hear ya!

We all can’t work in the public sector. Who would pay the taxes that would employ everyone in the public sector? Keep bragging and some angry boomer just might take their anger out on you. If you’ve got it good I suggest enjoying it and keeping it to yourself. Talk… Read more »

why would boomers be angry? they’ve had the best lives timing wise of any generation in american history! Easy to find jobs and cheap real estate that escalated unbelievably. It’s a close second for the generation before them. They started out with really rough lives, but have had the biggest… Read more »

Point well taken. What bugs me is that too many boomers, not all certainly, but a proportion, seem to begrudge any success by the succeeding generations. Seeing as how their comfort in old age hinges on the economic success of the up and coming generations, one would think that they… Read more »

So Mark .. you think people who work in public sector don’t pay taxes? That’s what I thought? Truth there, there as a***oles in every run …. A run being a chain rail being kinked because the cross bar connecter was crimped on the wrong side of the link. His… Read more »

Big Al – The problem with everyone working in the public sector is their employer doesn’t pay any taxes.