By News Staff on June 29, 2011 in Government Agencies/Utilities

Mammoth residents stopped talking about the town debt for awhile this 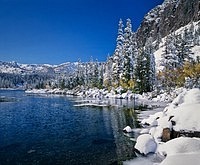 week when scores of motorhomes and would-be Fourth of July vacationers showed up in the Mammoth Lakes Basin to inhabit the campsites they reserved and paid for only to find that all but ten sites were still snowed in.  The Forest Service  said over 140 sites are not open that normally would be on the Fourth.

Reports said that Mammoth Mountain offered to provide space at Canyon Lodge and Chair 15 for the stranded visitors.  Nancy Upham, Public Information Officer for the USFS, said that the Forest Service did  place 90% of the vacationers elsewhere like June Lake, Convict Lake and Shady Rest.  She said 10% were “pretty unhappy with the whole situation” and left.

As for the lack of communication to campers, Upham said, “Protocols of what should have happened broke down.”  Upham explained that a concessionaire, CLM, operates the campgrounds and another separate company, Reserve America, handles reservations.  A breakdown occurred somewhere, but right now Upham said the Forest Service will not spend time to investigate since it has its hands full trying to open campgrounds for the holiday.

Upham said that this problem is a national issue.  “On a nationwide basis,” she said, “there are more campgrounds closed due to floods, snow and fire than ever before.”  She called it an “unprecedented level of problems across the nation.”

We do know a 2pm meeting was called on Wednesday in Mammoth Lakes that included Town Council members, the Forest Service, campground concessionaires and others. So, a number of resources have focused on the problem.

Upham said that last weekend only two campsites were open in the Lakes Basin.  This weekend, she said, it is anticipated that almost all but Coldwater and Lake George will be open with some exceptions at Lake Mary and Twin Lakes.  In addition to clearing snow, crews have to deal with hazard trees and other issues.

Upham added that the Reds Meadow area sustained broken sewer lines that have caused problems.   Campgrounds there were not open.  Upham said the Forest Service is trying to open three campgrounds in Reds Meadow.

When asked about the campground issue, Councilman Skip Harvey said he understands this problem started last Friday.  Harvey said, “This is a classic example of what happens when you contract with people who are not familiar with the local environment.”

I really love the comment about taxing the motorhomes to keep them out. Maybe we should tax all rv’s to the extent that nobody will buy them. That way we can send a message that RV people are not cool like tenters. And when the RV industry goes bellyup, that… Read more »

“I really love the comment about taxing the motorhomes”

“when the RV industry goes bellyup”

u mean , they still make these gas guzzling behomeths? who knew?

Wow. Some of the comments on here are pretty lame. Why is it the same folks keep commenting and beating their own same dead horse… hating and blaming the Town and/or government. I think Skip summed it up pretty well… “This is a classic example of what happens when you… Read more »

Cheap to expensive depending on what a person would want. These campers would probably want cheap, forced air, a view and no snow.

Big Springs campground, about 11 miles NE of Mammoth was still closed a weekend ago and there is no snow there. Same with upper Deadman. Open them up already and send them there. Or they can stay in one of our lovely condominiums in town. No mosquitoes at all. [email protected]

It is a case of BIG government trying to downsize and let the more experienced private sector that knows how to run things better show us how to do it. The town of Mammoth Lakes had nothing to do with this. Small businessmen in Bishop should be thankful that Mammoth… Read more »

BIG goverment never tries to downsize, they are being forced to downsize because us taxpayers are tired of not getting our tax dollars worth from public sector employees. And you’d better bet we are after your pensions too.

“The inefficiency of the US Government and Town of Mammoth at it’s best again. They are doing their best to kill the small business man.” Wrong. It was private industry that dropped the ball. Private concessionaires run those campgrounds (where in some cases it is almost $30 a night for… Read more »

More often then not, the private sector does it cheaper. And that doesn’t mean we get what we pay for when the government does it better. Get over yourself Wildman.

Yes Rob, the world should be run by “for profit” companies, that will fix all the problems. There is never corruption in big business, and they always do everything well. (Enron, GM, BP…)

Visitors,go on up to June Lake,Lee Vining,Bridgeport,Walker….Good fishing,campgrounds are all open,nice and friendly little towns…..AND you can safely walk the streets with your families if you happen to be out after dark.

june lake is a great place .

Dude, the Town of Mammoth Lakes has nothing to do with this, call President Obama and complain about the Federal workers.

It’s all run by liberals up there, why would complaing to Obama help. Mammoth is just as messed up as the Obama administration.

Once again Spin Mistress Nancy Upham tires to explain away the failure of the US Forest Service in Mammoth Lakes. The USFS is in charge of the National Forest and contracts the campground management and reservations out to private companies. The Town of Mammoth Lakes has nothing to do with… Read more »

The inefficiency of the US Government and Town of Mammoth at it’s best again. They are doing their best to kill the small business man.

The Town has no say or jurisdiction over the campsites…They are with the cooperation of the mountain working to find solutions to a problem created by a 3rd party. Your comment has no value. Read the story before posting

How about the visitors being “awake” enough to call ahead. if they haven’t been aware of the heavy winter, they don’t belong up here.

Surrounded by ?
Reply to  Bishop Dude

Hey Bishop Dude get a Clue. Mammoth Lakes has nothing to do with the camp grounds. They’re owned by the Forest Service and Leased to companies who manage them. Because the companies aren’t from here they have no idea what the heck is happening in this area. This is the… Read more »